How Jeff Sessions Is Getting Tough on Drug Crime 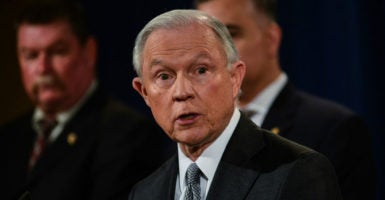 Being a drug dealer in the United States just got more risky.

This means that absent extenuating circumstances, prosecutors must pursue offenses that carry the highest penalties under federal guidelines, including mandatory minimum sentences.

Mandatory minimum sentences provide that if someone is convicted of selling over a certain quantity of a particular drug, a judge must sentence the offender to a certain minimum sentence, which can, depending on the offense, range from five years up to life imprisonment.

For example, if someone sells 1 gram of LSD, 5 grams of pure methamphetamine, 28 grams of crack cocaine, or 100 grams of heroin, that triggers a mandatory minimum of five years for a first offense and 10 years for a second offense.

If someone sells 10 times that amount, that triggers a mandatory minimum sentence of 10 years for a first offense and 20 years for a second offense.

This policy, which will most assuredly have its greatest impact in the area of drug enforcement, is not groundbreaking. It has roots going back to a 1989 memorandum by Attorney General Richard Thornburgh.

That memorandum had been relaxed by Attorney General Janet Reno during the Clinton administration.

Predictably, Holder criticized this shift in policy as being “dumb on crime.”

Sessions announced this significant policy change after receiving honorary membership in the New York City-based Sergeants Benevolent Association, where he reiterated that mandatory minimum sentences are reserved only for those who traffic in large quantities of drugs.

We’re seeing an increase in violent crime in our cities—in Baltimore, Chicago, Memphis, Milwaukee, St. Louis, and many others. The murder rate has surged 10 percent nationwide—the largest increase since 1968. And we know that drugs and crime go hand-in-hand.

Drug trafficking is an inherently violent business. If you want to collect a drug debt, you can’t file a lawsuit in court. You collect it by the barrel of a gun.

In 2015, more than 52,000 Americans died from a drug overdose. According to a report by the New England Journal of Medicine, the price of heroin is down, the availability is up, and the purity is up.

We intend to reverse that trend. So we are returning to the enforcement of the law as passed by Congress—plain and simple.

If you are a drug trafficker, we will not look the other way. We will not be willfully blind to your conduct. We are talking about a kilogram of heroin—that is 10,000 doses, 5 kilograms of cocaine and 1,000 kilograms of marijuana.

These are not low-level offenders. These are drug dealers. And you’re going to prison.

Cartel leaders, drug kingpins, and gang leaders who run drug rings should be taken off the streets for long periods of time. Doing so protects public safety and sends a signal to would-be drug dealers that they can expect a similar fate if they engage in such activity.

It is undeniable that drug dealing, which is often carried out by gangs, and almost invariably involves the actual or threatened use of violence and the inherent risk of overdose, is a dangerous and harmful activity.

To many, the phrase “nonviolent drug offender” is an oxymoron.

When properly deployed against drug kingpins and organizers and leaders of large-scale drug conspiracies, mandatory minimum sentencing can be an effective deterrent and an efficient use of scarce federal resources.

The trick will be making sure that the new policy is indeed targeted to such individuals and not against minor players who are only peripherally involved in large-scale drug conspiracies. Mandatory minimum charges and penalties are usually determined by the type and quantity of the drug involved, not the criminal record of the person involved in their sale.

Moreover, if a minor street dealer or courier (who may be engaging in such activities to support a personal drug habit or at the behest of an abusive boyfriend) is charged as part of a conspiracy, that individual may be held responsible not only for the drugs she sold, but also for the drugs sold by any and all of her co-conspirators—even if she had no idea who those co-conspirators were or what they were selling.

[M]andatory minimum penalties sweep more broadly than Congress likely intended. Many in Congress emphasized the importance of these penalties for targeting kingpins and high-level members of drug organizations.

Yet the commission found that 23 percent of federal drug offenders were low-level couriers who transported drugs, and nearly half of these were charged with offenses carrying mandatory minimum penalties. The category of offenders most often subject to mandatory minimum penalties were street-level dealers—many levels down from kingpins and organizers.

Under existing federal law, there are two ways that an offender who has been convicted of a mandatory minimum offense can escape receiving a mandatory sentence: He can provide “substantial assistance” to government officials, enabling them to prosecute others who are engaging in serious criminal conduct, or he can qualify under the “safety valve” designed to provide relief to those who are bit players with only a modest prior criminal record.

One problem, however, is that the current safety valve is quite narrow, affording relief to very few individuals. Bit players are rarely in a position to render substantial assistance to the government because they are too low on the totem pole to have any useful information.

Moreover, under existing law, if the individual was convicted of any crime and received a sentence of 60 days or more, he no longer qualifies for the safety valve.

In essence, mandatory minimum penalties are a blunt instrument that can be very effective if utilized against the right category of offenders.

Let’s hope that the Sessions Department of Justice implements this revised policy to target those who truly pose the greatest threat to public safety, and not against minor players who simply made poor life choices and do not deserve such harsh sentences.

If not, Congress may need to explore at least a modest expansion of the scope of the existing safety valve in order to ensure that mandatory minimum penalties are reserved for leaders and organizers of the gangs who spread misery and peddle poison on the streets of this country.