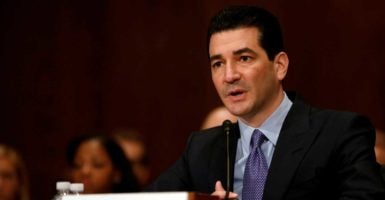 Dr. Scott Gottlieb was a senior FDA administrator under former President George W. Bush, and has advised the Department of Health Human Services on health IT policy. He will now head the FDA under President Donald Trump. (Photo: Aaron P. Bernstein /Reuters/Newscom)

The Senate confirmed Dr. Scott Gottlieb to lead the Food and Drug Administration Tuesday, filling in the list of presidential appointments at the Department of Health and Human Services.

President Donald Trump’s nominee for commissioner of food and drugs was confirmed by a vote of 57-42.

As commissioner of the FDA, Gottlieb, a physician, will report to Health and Human Services Secretary Tom Price and oversee the regulatory and approval process for new drugs.

Gottlieb was a senior FDA administrator under former President George W. Bush, and has advised the Department of Health and Human Services on health IT policy. He has written extensively on drug and health reform topics for a variety of journals and newspapers, and practiced internal medicine for many years.

Like other Trump nominees, Gottlieb has criticized the agency he will now lead. He once decried the “harmful culture” as damaging to the agency’s core mission.

The FDA’s desire to ensure drugs are perfectly safe before approving them is “driven not by fear of unforeseen dangerous side effects caused by drugs under review, but rather by a deepening mistrust of the doctors who eventually prescribe such medicines and the companies that market them,” Gottlieb wrote in a 2012 essay published in National Affairs.

“Simply put, the modern FDA is driven by a profound lack of confidence in the ability of doctors to make careful judgments,” Gottlieb wrote.

Gottlieb faced many questions about whether he will side with the pharmaceutical industry in approving new drugs, potentially risking the safety of patients, during his April 5 confirmation hearing before the Senate Committee on Health, Education, Labor, and Pensions.

“We should reject a false dichotomy that it all boils down to a choice between speed and safety,” Gottlieb said.

“People’s lives are literally on the line when it comes to the decisions FDA makes, its oversight, and its enforcement of Congress’ laws,” Gottlieb said in his opening statement.

He said rampant opioid addiction in America is “a public health emergency, a public health crisis” no less challenging than the recent Ebola outbreak.

To avoid a conflict of interest, Gottlieb said, he plans to recuse himself during his first year in the position from decisions involving 20 pharmaceutical companies from which he has financially benefitted.

“I will work hard to make sure I preserve my integrity in this role and the integrity of FDA,” Gottlieb said. “I want to earn and keep the public’s trust.”

Industry groups are pleased with Gottlieb’s mission to push for reforms at the FDA.

Gottlieb “sounds like a progressive person who wants to get things done,” David Ricks, CEO of pharmaceutical giant Eli Lilly & Co., told The Wall Street Journal. “He’s got experience in the agency already. He’s a doctor and a cancer survivor. Sounds to me like he has a balanced perspective.”

“We look forward to working with Dr. Gottlieb in his new role as they seek to modernize the drug discovery and review process and advance competition in the biopharmaceutical market,” Stephen J. Ubl, president of Pharmaceutical Research and Manufacturers of America, told CNN.