Congress Has Ceded Too Much Authority to Agencies. This Bill Would Restore a Healthy Balance. 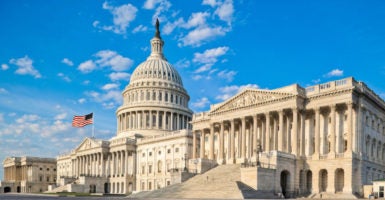 Congress’ power of the purse is one of its bedrock responsibilities listed in Article 1 of the Constitution.

The Supreme Court has reaffirmed this power on several occasions, including in a 1976 case when the Court declared, “The established rule is that the expenditure of public funds is proper only when authorized by Congress, not that public funds may be expended unless prohibited by Congress.”

By allowing federal agencies widening authority to collect fines and fees and to repurpose those revenues, Congress has diluted its power over public funds and minimized its oversight ability.

Steps must be taken to restore this key constitutional power and bring accountability back to the appropriations process.

Earlier this year, Rep. Gary Palmer, R-Ala., and Sen. Mike Lee, R-Utah, introduced the Agency Accountability Act of 2017 to do just that.

Under current law, agencies have the ability to use funds received through fines, fees, and proceeds from legal settlements without going through the formal appropriations process, thus avoiding congressional oversight.

Palmer and Lee’s bill would end that practice by requiring that funds collected directly by federal agencies be returned to the Treasury and be subject to the regular appropriations process.

The amount of revenue-collecting power Congress has ceded to federal agencies is staggering. In fiscal year 2015 alone, agencies collected $516 billion through a wide array of user fees.

While allowing agencies to collect and use fees as they see fit may be more efficient in some instances, it comes at the cost of transparency.

According to a report from the House Oversight and Government Reform Committee, agencies collected $83 billion in fines between fiscal years 2010 and 2015. The committee found that the amount of power given to agencies to pursue penalties and legal settlements allows them to act as both judge and jury.

This is troubling when those same agencies can then spend whatever is collected with little to no congressional oversight.

Agencies use a portion of these collected revenues to offset their annual spending, but a large amount remains within the agencies themselves and is used to finance programs outside of the appropriations process.

Numerous federal agencies, including the Consumer Financial Protection Bureau and the Financial Stability Oversight Council, are funded solely through fines and fees and receive no annual appropriations from Congress, resulting in almost no congressional involvement in the way these agencies are run.

The Agency Accountability Act seeks to correct this problem by requiring that (with limited exceptions) any fees, fines, penalties, or proceeds from a legal settlement be deposited into the Treasury’s general fund.

The funds would then be available to the respective agencies, but only through the formal appropriations process.

By forcing agencies to return these revenues to the Treasury’s general fund before they are appropriated back to the agencies, Congress would be able to fully account for how much revenue these agencies collect and what sources they collect from.

This would also allow Congress to carefully determine how best to use these funds, rather than leaving it up to the respective agencies to do as they see fit.

Oversight is one of the fundamental duties that Congress is tasked with. With about two-thirds of the annual federal budget already consisting of “auto-pilot” mandatory spending, Congress should not allow any additional spending to fall outside the annual appropriations process.

The Agency Accountability Act would bring much-needed accountability to federal agencies and empower Congress to reclaim its rightful power of the purse.