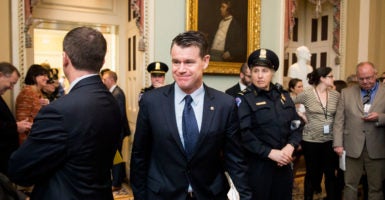 For political and practical reasons, lawmakers across the partisan divide have permitted President Barack Obama, and now, President Donald Trump, to carry out a bombing campaign against ISIS without specific congressional approval.

More than 40 times in U.S. history, Congress has authorized the use of military force in the form of what’s known as an Authorization for Use of Military Force, or AUMF, which gives the basic legal authority for American military power against an enemy.

As Trump carries on where Obama left off, and promises to accelerate the fight against the Islamic State, also known as ISIS, in Iraq and Syria, some lawmakers who have long called for explicit congressional approval for this military campaign—but failed to inspire Congress to even take a vote—are making a strong push to revisit the issue.

“I believe it is long past time for Congress to pass and consider an AUMF for the fight against ISIS,” said Sen. Todd Young, R-Ind., in a speech at The Heritage Foundation on Monday. “The Founders, in my view, intended—and the Constitution demands—that Congress play a decisive role in the decision go to war, not acting as a rubber stamp or passive observer. This failure by Congress to fulfill its constitutional authorities isn’t good for our country.”

Trump, like Obama before him, is operating the fight against ISIS under an existing 2001 AUMF permitting the targeting of groups connected to the 9/11 attacks and the 2012 AUMF authorizing the Iraq War.

Obama had encouraged Congress to authorize military force against ISIS, and even authored his own AUMF explicitly targeting ISIS for lawmakers to review.

Democrats and Republicans found different reasons to oppose Obama’s AUMF, which included limitations on the length of time the U.S. could fight ISIS—the measure would have expired in three years—and on the use of troops (“long-term, large-scale ground operations” were not permitted).

Many Republicans viewed this proposal as overly restrictive, and Democrats, meanwhile, saw it as not limiting enough.

Stephen Preston, the general counsel for the Department of Defense in the second term of the Obama administration, says the former president had the authority to prosecute the military campaign against ISIS using the old 2001 and 2012 AUMFs.

But Preston says he, on behalf of Obama, continued to push for a new ISIS-specific AUMF as a way for Congress to show the world that America is united in the fight against terrorism.

“I firmly thought then and now that it’s imperative for Congress to act to carry out its constitutional role to take this country to war,” said Preston, who also spoke at The Heritage Foundation event. “I feel this way not because [a new AUMF] is necessary to be lawful, but because it’s important in our democracy and government of shared powers for Congress to play its role. It’s important to show the men and women in uniform, and the American people, that the government is united in its support for the fight, and also to show our partners and our adversaries that this country and our government is united in the fight.”

In a sign that Congress may be ready to take a more active role, a new spending agreement to fund the government through the end of the fiscal year contains a clause providing an additional $2.5 billion in military spending if Trump delivers a plan on how to defeat ISIS.

Young, a member of the Senate Foreign Relations Committee, has introduced a proposed AUMF that would also mandate the Trump administration to submit a “comprehensive strategy” to beat ISIS.

His AUMF would approve the use “of all necessary and appropriate force” against al-Qaeda, the Taliban, ISIS, associated forces, and “successor organizations.”

Young said he believes that Trump would be more likely than Obama to support a broader, more open-ended AUMF such as this.

Yet he recognizes potential opponents may seek stronger limitations—such as a sunset provision limiting the duration of military force—at a moment when Americans are weary of war.

“I struggled with this,” said Young, who served in the Navy and Marines. “The downside of a sunset [provision] is you allow the enemy to figure out when you will disengage. When America goes to war, it ought to win, so it’s important to give the commander in chief discretion in that area. On the other side, we need to avoid perpetual wars, and I believe we can avoid that by ensuring we have a robust strategy with sufficient congressional oversight.”

Charlie Savage, a Pulitzer Prize-winning journalist with The New York Times who has written extensively about the government’s power to prosecute war, shares Young’s optimism that a Republican-controlled Congress may be likelier to pursue an ISIS-specific AUMF under Trump.

But Savage, speaking at The Heritage Foundation event, argued that Congress has already harmed its reputation, and weakened its own powers, by not yet having authorized the ISIS fight.

“It seems like the conditions are there to clean this up, just because I don’t see where the opposition to [an ISIS AUMF] is organized in the sense that Obama won’t sign the bill,” Savage said. “Trump will sign the bill.”

“As time continues to pass, this is the opposite of urgency,” Savage added. “The damage is sort of done. At this point, it may be that the scab and the scar tissue has already formed. I am not quite sure what damage is being fixed as much today if this ever were to happen.”