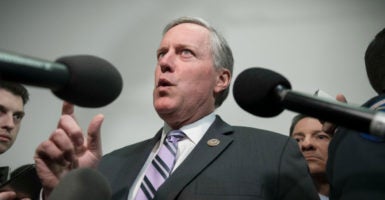 New developments on the American Health Care Act may finally break the legislative logjam on the bill and make progress toward repealing and replacing Obamacare.

Rep. Tom MacArthur, R-N.J., is proposing an amendment that would allow states to apply to the secretary of health and human services for “waivers” from Obamacare’s contentious insurance rules for a period of 10 years.

Most significantly, states could secure waivers from Obamacare’s costly “essential health benefits” requirement (the mandatory 10 categories of health benefits). Under the language of the amendment, the waivers would be virtually automatic.

Federal control over state health insurance markets has been a costly experiment. Obamacare rules have contributed in a major way to skyrocketing health insurance premiums. This is especially true for younger people saddled with much higher insurance costs because of the law’s age-rating rules.

The overall impact has been painful. For 2017, premiums for standard plans in the exchanges have increased by an average of 25 percent, and people in those markets have experienced shocking deductibles ($6,092 for single and $12,383 for low-cost “bronze” coverage).

Yet an estimated 25 million Americans in the individual and small group markets are ineligible for the law’s low-income subsidies.

These cost explosions have undercut competition and choice not only in the Obamacare exchanges, but also in off-exchange markets.

Indeed, in the exchanges, competition has declined to the point where in almost 70 percent of U.S. counties there are only one or two insurers offering coverage. Meanwhile, most of the remaining plans offer only narrow networks of medical professionals.

President Barack Obama and his allies in Congress should never have imposed centralized federal control over diverse state health insurance markets in the first place.

While the best solution would be to repeal that federal overreach, the proposed waiver is a significant improvement over current law. Its practical effect is to achieve a devolution of health insurance rulemaking back to the states.

The waiver approach would enable states to regain their traditional freedom in this vital area of public policy, and accommodating differences among the states would encourage experimentation and innovation in health insurance market reform.

For example, in improving protection for people with pre-existing medical conditions in the individual market, Congress should apply the successful provisions that, prior to Obamacare, worked very well in the group market and that encourage people to maintain continuous coverage.

Likewise, the bill’s Medicaid provisions are an improvement over current law.

For able-bodied Medicaid beneficiaries, however, Congress could do even better by providing them with a “premium support” solution that would enable them to enroll in private coverage of their choice, just like their fellow citizens, and secure better access and medical outcomes.

As Heritage Foundation analysts have long noted, there are a variety of ways to accomplish that goal.

In particular, rather than further delaying the effective date of Obamacare’s “Cadillac tax” on high-cost employer health plans (as the House bill does), Congress should scrap that punitive and disruptive tax and instead set a simple cap on the amount of pre-tax spending on employer health benefits—as the tax code currently does for other workplace benefits.

While the House may not be able to address all of these items under a tight legislative schedule, there is no reason why the Senate cannot act effectively and expeditiously.

After seven years, the American people who voted for change have waited long enough.