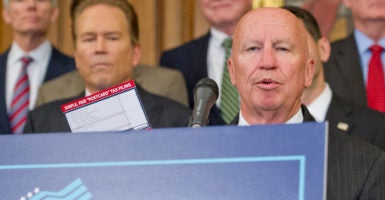 A study released Monday by the president’s Council of Economic Advisers found that congressional Republicans’ tax reform framework would produce thousands of dollars in income growth for American households.

“Reducing the statutory federal corporate tax rate from 35 [percent] to 20 percent would … increase average household income in the United States by, very conservatively, $4,000 annually,” says the report from the advisory agency within the Executive Office of the President.

Income increases could reach as much as $9,000, according to the report.

According to the nonprofit Tax Foundation, the U.S. “has the fourth-highest statutory corporate income tax rate in the world.” The foundation’s September report continues:

“The U.S. rate of 38.91 percent (comprised of the federal statutory rate of 35 percent plus an average of the corporate income taxes levied by individual states) ranks only behind the United Arab Emirates (55 percent), Comoros (50 percent), and Puerto Rico (39 percent).”

“The main reason that wages increase is that the lower tax rate reduces the total cost of a firm that’s investing in a capital asset, like a machine, here in the U.S., and more assets like machines let workers produce more,” Kevin Hassett, chairman of the Council of Economic Advisers, said in comments released Monday. “And when workers can produce more, businesses can afford to pay their workers more.”

It calls for roughly doubling taxpayers’ standard deduction (an individual’s first $12,000 of income would become tax-free, as would the first $24,000 for married couples) and for condensing the current seven tax brackets to three.

“The  increases recur each year, and the estimated total value of corporate tax reform for the average U.S. household is therefore substantially higher than $4,000,” the report says. “Moreover, the broad range of results in the literature suggest that over a decade, this effect could be much larger.”

The researchers also found that real wages, the value of wages adjusted for inflation, are expected to rise by between 4 percent and 7 percent. “The Boston University analysis shows that the GOP’s Unified Framework will raise wages by [4 percent to 7 percent], translating into a $3,500 wage increase for an average American household,” says Adam Michel, a tax-policy analyst at The Heritage Foundation.