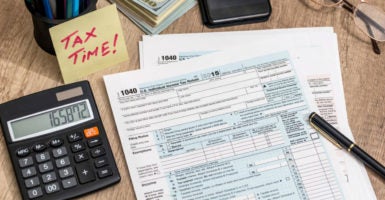 The average taxpaying American spends 15 hours compiling information before filing taxes, and $280 to pay an accountant or online program to do them. (Photo: iStock Photos)

If you’re in need of a great dinner party topic, try taxes.

We pay taxes, we complain about paying taxes, and we admit to not understanding the complicated code that dictates how much we pay. Sounds like we have a lot in common, so let’s chat.

In anticipation of Tax Day next week, and Capitol Hill’s next item on its to-do list—tax reform—there is no better time to defend conservative values and the free-market approach.

Here are a few suggestions to navigate the wonky waters and have a civil conversation about tax reform.

Common ground is easy to find because EVERYONE pays taxes—income, sales, property, etc.

Most agree that we have to pay taxes as part of our civic duty, but most also agree that it’s a complicated process no one enjoys. Therefore, reform is necessary. Start your conversation by acknowledging the need to pay, but then pivot to the complicated, costly, and mysterious process it has become.

(The one exception? If you’re talking to a socialist. They exist and have no problem with taxes—especially when the taxes hit other people’s wallets and not their own. In this situation, focus on the complicated tax-paying process. Even if they wish they could grant more control to the government, they’ll likely agree that transparency would be great.)

Don’t geek out. I repeat, DO NOT geek out.

But consider a different path forward in conversations with the unsuspecting.

Avoid the technical. I promise your fancy words, phrases, and percentages will not impress or convince them. Instead, fly at 35,000 feet and paint the big picture. Relate your talking points to the families and businesses in their community.

Because we pay into a complicated system via a process that very few understand, your average taxpaying citizen spends 15 hours compiling information to start the tax filing process and an average of $280 to pay an accountant or online program to do his/her taxes.

If we modernize and simplify this outdated tax code, people will save time and money, and have a clearer understanding of how much they owe (and why). It’s a win-win-win.

Depending on your audience, you may be able to find agreement by explaining double taxation. For example, taxing people after they die or taxing people on interest earned off investments. These taxes make it difficult to save and prepare for the future.

Let’s not cripple the next generation.

The United States has the highest corporate tax rate in the industrialized world. This means we tax our corporations at a higher rate than every European country, including France. Ouch.

Other than a bruised ego, what does this mean? Larger businesses choose to move and operate outside our borders, which hurts the U.S. economy. Here’s a list of the businesses that’ve left since 2012.

We don’t want this. It’s not good for anyone.

But what about small businesses that can’t afford to ship efforts overseas? Many times they have to cut jobs and/or services to pay the higher rate.

Tax reform is complicated and can easily be summarized by decimal points and dollar signs. Don’t give in. Tax policy affects people, so make sure to humanize your talking points by the words you choose.

The left loves to talk about the “evils” of “big corporations” as if the jobs they create and the economy they serve don’t have a face. When they say “corporation,” you say “business” and emphasize that businesses employ “people” with “families.”

It’s easy to vilify a cold “corporation” that is profit hungry, but much more difficult to shrug your shoulders at the employees trying to be productive members of society and raise families.

As Uncle Sam is on everyone’s mind this week in anticipation of Tax Day, take this opportunity to have a conversation about tax reform. Acknowledge the common ground, cite examples that focus on the people and families affected by poor tax policy, and humanize a wonky issue with the right words.