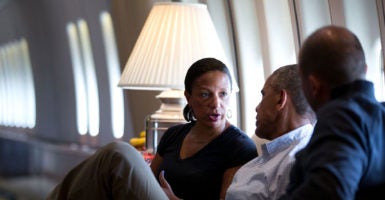 Political opponents have been quick to suggest that Susan Rice committed a crime in her waning days as national security adviser to President Barack Obama in the way she handled intelligence reports related to those close to the incoming president, Donald Trump.

But to have broken federal law, national security experts told The Daily Signal, Rice would have had to purposefully leak such information to the media or knowingly place it in the hands of someone not entitled to possess it.

These experts said Rice likely did not commit a crime by asking to see the names of persons close to Trump whose communications were captured after the election in surveillance of foreigners by U.S. spy agencies.

That’s because, under federal law, government officials such as Rice have broad powers to request and receive information about Americans permitted by eavesdropping rules that civil liberty advocates long have viewed as overly expansive.

“I don’t see any illegal activity here,” said Patrick Eddington, a former CIA analyst who is now a policy analyst in homeland security and civil liberties at the Cato Institute, in an interview with The Daily Signal. “What this does do, however, is raise a larger question, which is whether the U.S. government should be allowed to collect and retain Americans’ data for any amount of time in the course of incidental collection, unless there is a real, legitimate investigative predicate for doing so.”

>>> What Could Be Next for Susan Rice in ‘Unmasking’ Controversy

Under Section 702 of the Foreign Intelligence Surveillance Act, or FISA, intelligence agencies frequently monitor the conversations of foreigners—including officials with allied or hostile countries—in what supporters view as one of the key government tools to keep the country safe.

Americans whose communications are incidentally captured—meaning somebody else was the target—in surveillance of foreigners generally are not named in intelligence reports unless there is a specific request to reveal, or “unmask,” their identities.

Under FISA, the standard required to ask for a name to be unmasked is easy to meet—it has to be necessary to understanding the value of the intelligence—meaning it’s unlikely Rice did not follow the rules if intelligence officials ultimately granted her requests.

“There is a set of procedures in place whenever a policymaker wants to have specific data unmasked to make a determination on its significance and whether further action is required,” Eddington said.

“The only way we really determine if those rules were not followed [in cases involving Trump associates] is when we have all the data out, proper interviews have been conducted, and ideally, there is a public hearing where all of this gets fairly hashed out.”

In a Wednesday interview, Trump told The New York Times that he thinks Rice may have committed a crime. The president did not provide evidence for his claim, or expand upon what he thinks Rice specifically did wrong.

National Security Agency Director Michael Rogers, in testimony before the House intelligence committee last month, said 20 people at the NSA have the authority to grant a request, including himself.

“Susan Rice did not unmask anything,” Elizabeth Goitein, who co-directs the Brennan Center for Justice’s liberty and national security program, said in an interview with The Daily Signal. “She asked the NSA or whoever the source agency is to unmask. So even if it were a crime to unmask, it wouldn’t be one she committed. There is absolutely no reason to even be talking about criminal activity here.”

Experts say it could be a crime, though, if Rice leaked the name of any American caught in surveillance reports. Rice denied doing so in a Tuesday interview with MSNBC.

In an interview last month with “PBS NewsHour,” though, Rice appeared to deny that conversations involving Trump officials were incidentally collected during surveillance.

The government has a range of criminal statutes it may use against leakers, including the Espionage Act of 1917, which prohibits the improper accessing, handling, or transmitting of “information respecting the national defense” with the intent of injuring the U.S. or aiding a foreign nation.

Another related statute prohibits disclosure of classified information, including information “concerning the communication intelligence activities of the United States or any foreign government.”

It’s also possible Rice abused her lawful authority, the national security experts told The Daily Signal, although there is no evidence she has done so.

An example of this would be if Rice sought the names of Trump transition or campaign officials and then spread the information in an improper way.

The Times reported in March that Obama’s aides sought to preserve intelligence on Russia’s meddling in the presidential election, and about potential ties between Russian officials and Trump.

As part of that effort, the Obama administration in its final weeks allowed this type of information to be distributed more widely across the government.

“She might not necessarily be the leaker, but she could pass the information to unauthorized people who may have a security clearance, but who don’t have a ‘need to know’ status,” David Shedd, an acting director of the Defense Intelligence Agency under Obama who also served in the George W. Bush administration, said of Rice in an interview with The Daily Signal.

“Those people could then pass the information on to people who do the leaking,” added Shedd, who is now a visiting fellow at The Heritage Foundation. “There is still no evidence that this is what happened, and she could easily defend herself by saying she had no way of knowing information would be leaked.”

Leaks about Trump’s first national security adviser, Michael Flynn, and his pre-inauguration conversations with the Russian ambassador forced his resignation after less than a month on the job. The Wall Street Journal reported that Rice was not the person who requested Flynn’s name to be unmasked.

The FBI, in addition to the House and Senate intelligence committees, is currently investigating Russia’s interference in the presidential election, including whether Trump campaign or transition officials colluded with Moscow.

The Journal reported the House Permanent Select Committee on Intelligence wants Rice to testify as part of its investigation.

Rep. Devin Nunes, R-Calif., chairman of that committee, temporarily recused himself from the investigation Thursday after critics said he is too close to the White House to lead the probe impartially.

Sen. Richard Burr, R-N.C., chairman of the Senate Select Committee on Intelligence, said Tuesday his panel could be interested in interviewing Rice as well.

The FBI generally does not confirm the subjects of its investigations.

He said investigators likely will review Rice’s requests to get a better understanding of whether she and intelligence officials followed proper procedures. Whether the compilation of those requests provides circumstantial evidence of her intent would be difficult to prove, he said, because of the natural overlap of national security and politics.

For example, Rice could have been concerned Trump transition officials communicated with foreign governments and tried to interfere with diplomatic relations under the Obama administration, thus violating the Logan Act.

No one ever has been convicted of violating this 1799 law, and the Trump administration has said such conversations were a normal function of a presidential transition.

“Let’s say Rice for a variety of reasons was worried that somebody in the Trump campaign was attempting to violate the Logan Act, meaning they were trying to undermine the existing foreign policy of the Obama administration,” Shedd said.

“That has political and national security implications. If Rice is requesting names to just kind of keep tabs on who Trump transition officials are talking to, that’s different. But proving that is what she is doing it for would be hard, because you have to prove it didn’t have a national security purpose.”