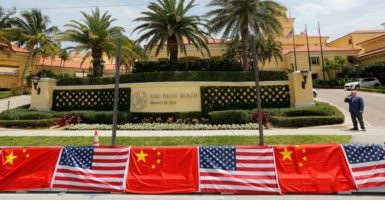 The Eau Palm Beach Resort and Spa in Manalapan, Florida, is where Chinese President Xi Jinping will stay when he visits President Donald Trump at nearby Mar-a-Lago. (Photo: Joe Skipper /Reuters/Newscom)

North Korea will be the top agenda item for President Donald Trump when he meets Friday with Chinese President Xi Jinping.

“We have somebody that is not doing the right thing and that’s going to be my responsibility,” @POTUS says.

“As you know, I’ll be meeting with the president of China very soon in Florida, and that’s another responsibility we have, and that’s called the country of North Korea,” Trump said Wednesday during a Rose Garden press conference with King Abdullah II of Jordan.

“We have a big problem. We have somebody that is not doing the right thing and that’s going to be my responsibility,” Trump said, referring to North Korean dictator Kim Jong Un. “But I’ll tell you, that responsibility could have been made a lot easier if it was handled years ago.”

White House officials said there were a number of other items the two leaders will discuss—one being trade and commerce—paramount during Trump’s campaign, where he frequently took shots at the Chinese.

The meeting Friday and Saturday at Trump’s Mar-a-Lago estate in Florida will be a significant chance for both leaders to learn about one another, said Fred Fleitz, a former State Department official in the George W. Bush administration.

“China is coming here to try to figure Trump out. He’s not like a president they’ve ever seen before. He’s not a president they can walk all over like Obama was,” said Fleitz, now a senior vice president for the Center for Security Policy, a national security think tank.

Here are the four key issues Trump and Xi will likely be discussing.

North Korea initiated a missile test this week aimed at Japanese waters, but the test reportedly failed. The country previously conducted a missile test in February, and several in 2016. North Korea leader Kim is reportedly seeking to produce a long-range nuclear weapon capable of hitting the continental United States in a few years.

“Trump is going to be forceful with China over North Korea. He is not going to ask for help anymore. We are going to demand help,” said Walter Lohman, director of the Asian Studies Center at The Heritage Foundation. “The time for talk is over. The U.S. can impose secondary sanctions on Chinese companies if China doesn’t cooperate.”

A senior White House official told reporters the matter is urgent and “the clock is now very, very quickly running out.”

“Because of the amount of leverage that China has economically, the best outcome would be one in which China very thoroughly implements the U.N. sanctions and resolutions,” the official said. “That is really what we’re working toward.”

The administration recognizes it is economically interdependent with China, but will insist that all bilateral trade be “mutually beneficial,” according to a White House official.

“President Trump is very concerned about how the imbalance in our economic relationship affects American workers, and wants to address these issues in a candid and productive manner,” a senior White House official said. “President Trump will convey to President Xi the importance of establishing an economic relationship that is fair … We want to work with the Chinese in a constructive manner to reduce the systemic trade and investment barriers that they’ve created that lead to an uneven playing field for U.S. companies.”

“The United States will certainly continue to fly and sail where international law allows. I would not be surprised if that came up in conversation,” a senior White House official told reporters. “It’s no secret that the president was disturbed by activities that took place under the last administration. He and his Cabinet members have been on the record as saying that has got to stop.”

This is again a matter in which the Obama administration allowed China to show too much assertiveness, Fleitz noted.

“China will look at American leadership. The lack of leadership has been very destructive,” Fleitz said.

Fleitz also said that Trump should make a strong statement about China’s mistreatment of the Uyghur community in Xinjiang, which human rights groups have criticized.

He said there are several issues to address specifically, but hopes Trump speaks broadly about China’s abysmal human rights record in the meeting.

A White House official said this will likely come up.

“I’m not going to pre-speak the president’s talking points, but human rights are integral to who we are as Americans,” the senior official said. “It is the reason we have alliances at the end of the day, one of the reasons, other than they serve our security and prosperity here at home. Human rights issues I would expect will continue to be brought up in the relationship.”