In Shift From Obama, Trump Leans on Military in Fight Against Terrorism 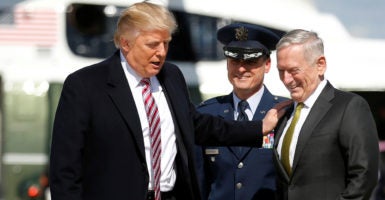 In a break from his predecessor, President Donald Trump is giving more power to the military in carrying out the campaign against the Islamic State, and counterterrorism more broadly.

Military and national security experts say Trump seems to be largely following President Barack Obama’s strategy to defeat the Islamic State, also known as ISIS or ISIL, and other terrorist groups—relying on American special operations to assist local forces who do the bulk of the fighting in countries like Iraq, Syria, and Afghanistan.

But critics of Obama’s approach to fighting ISIS say he and his political aides were too involved with operational and tactical issues, and that Trump’s decision to delegate decisions to the military could allow for faster defeat of the terrorist group.

“I have seen a dramatic shift in a very positive way—away from the political micromanaging of the Obama years to freeing up generals and troops to destroy ISIL and help our partners,” Sen. Lindsey Graham, R-S.C., said in an interview with The Daily Signal.

“The strategy shift to allow more authority to commanders in the battlefield is welcome news to me and bad news for ISIL,” Graham said.

While military leaders, and local forces doing the fighting against ISIS, welcome the opportunity to be more responsive to changes on the battlefield, some experts say Trump is assuming more risk by being hands-off.

Trump has been criticized for what looked to be a quick approval process for the military to conduct a January raid against terrorists from al-Qaeda’s branch in Yemen that resulted in the death of an American commando and several civilians.

Airwars, a nonprofit group that monitors civilian deaths from coalition airstrikes in Syria and Iraq, reports that in the month of March the number of reported civilian fatalities has increased to more than 1,000, from 465 in December, the last full month of the Obama administration.

Most recently, the senior U.S. commander in Iraq, Lt. Gen. Stephen J. Townsend, on Tuesday said that an American airstrike “probably had a role” in leading to the collapse of a building in Mosul that killed potentially hundreds of civilians. The U.S. military is investigating a March 17 American airstrike in Mosul, Iraq, that may have resulted in the collapse of a building that killed civilians. (Photo: Stringer/Reuters/Newscom)

“The Iraqis during the Obama years were constantly complaining we were not being aggressive enough in airstrikes, and I was one who argued the administration was a little too micromanaging,” said Andrew Exum, who was the U.S. deputy assistant secretary of defense for Middle East policy in the Obama administration, in an interview with The Daily Signal.

“The Mosul strike shows that as soon as you take more aggressive action and civilians are killed, it’s not like our Iraqi partners shoulder the blame—the blame falls on the U.S.,” Exum added. “You can delegate authority, but you can’t delegate risk. The risk associated with these types of strikes doesn’t stay at the tactical and operational role. It rapidly comes up to the strategic, political level.”

Pentagon officials have stressed this week that the rules of engagement that govern the military’s decisions around risk to civilians have not changed in the Trump administration.

Townsend did acknowledge the military has moved to speed up the process of providing airstrikes to help Iraqi troops and American special operations advisers in Mosul, with the goal to “decentralize” decision-making. Commanders in the field are able to request airstrikes without waiting for approval from more senior officers.

“This is part of a trend where it appears President Trump will empower Cabinet secretaries more than Obama did,” said Thomas Spoehr, the director of The Heritage Foundation’s Center for National Defense. “If you are in the Pentagon and you are more actively involved in making decisions, it causes you to be reflective because you own that decision. They know you can create more terrorists than you can kill if you cause a bunch of civilian casualties.”

Defenders of this approach note that reports of greater civilian casualties come at a time of more intense military operations in Mosul and by forces fighting ISIS in Syria.

Iraqi forces, with the help of the U.S. coalition, have mostly secured the east side of Mosul, Iraq’s second-largest city, but the fight for the west side of the city has entered a different phase, and it’s happening in tight, urban quarters where ISIS fighters purposely locate themselves near civilians.

“You can expect more risk of civilian casualties as the fight develops into confined spaces,” said Graham, who noted he has made 42 trips to Iraq and Afghanistan as a senator. “Mosul is house to house, street to street, and airpower in an urban environment is always tough to deploy. ISIS is an enemy that consciously puts civilians in harm’s way. The people of Mosul know we are there to help.”

Exum said in the Obama administration, the approval process for “dynamic airstrikes”—or those that are made and decided upon as action calls for, and not deliberately pre-planned—“never touched Washington, D.C.”

“The micromanaging criticism really wasn’t about airstrikes,” Exum said. “It was about movement of men, weapons, and material around the battlefield. The Obama administration gave wide, wide latitude to the commander [Gen. Joseph Votel] of U.S. Central Command (CENTCOM) in terms of collateral damage.”

Experts emphasize that Obama also earned pushback for controversial use of airpower, most notably when the U.S. in 2015 struck a hospital run by Doctors Without Borders in Kunduz, Afghanistan, killing staff members and patients.

“In the the Obama years, there were a lot of airstrikes done, a lot of them controversial and close calls,” said Michael O’Hanlon, a national defense and foreign policy expert at the Brookings Institution, in an interview with The Daily Signal.

“Part of what you saw later on in the administration was the White House trying to throw sand in the gears in a way that did not really change the strategy, but reduced the odds of a mistake. Some of us felt this was almost the Obama team trying to be a little too precious. You are trying to persuade yourself there’s this big constraint on our action but in the end you are still pulling the trigger.”

Though Trump is not straying too far from Obama’s counterterrorism strategy, experts say they see other signs of the new administration more heavily relying on military power.

Earlier this month, the U.S. sent an additional 400 troops to Syria to assist in the looming fight to take back Raqqa, ISIS’ self-declared capital—a near-doubling of the number of American troops already there.

The amount of U.S. advisers in Iraq supporting the Mosul offensive has also risen in recent months. Sen. Lindsey Graham, R-S.C., has advocated for military commanders to have more freedom to make battlefield decisions in the campaign against ISIS. (Photo: Erin Schaff/UPI/Newscom)

The strategy in both these missions hasn’t changed from the Obama administration, where local forces do most of the fighting, and the Americans assist with advising and logistical support.

“The Trump administration seems to be not as hung up on troop numbers, which I think can be healthy as long as there is good transparency between the president and his military leadership,” Exum said.

In addition, the Trump administration has loosened the rules for American special operations raids and airstrikes in Yemen, targeting the al-Qaeda affiliate there. The New York Times reported the U.S. has launched more airstrikes in Yemen this month than during all of last year.

The Times said Thursday that the U.S. has removed similar constraints in Somalia, declaring parts of the country an “area of active hostilities” to intensify fighting against the al-Shabab, a terrorist group linked to al-Qaeda.

The Washington Post reported this week the Trump administration is weighing a proposal by Defense Secretary James Mattis to escalate U.S. involvement in an ongoing war in Yemen between Iranian-backed Houthi rebels and a coalition of Persian Gulf states led by Saudi Arabia.

The Post said Mattis is advocating “limited” U.S. military support to an offensive by the United Arab Emirates to retake a Red Sea port from the Houthis, in a move to more aggressively confront Iran.

“This would be a complete change in attitude and a reversal in policy, and it’s about time someone stood up to the Iranians,” Graham said.

Preparing for ‘Day After’

Brian Katulis, a senior fellow for national security at the Center for American Progress, said Obama’s limited support to the Saudi coalition did little to stem a two-year-old war that has resulted in significant civilian casualties.

But he recommends more broadly that the Trump administration needs to support its increasing military efforts with a “day after” strategy to help resolve underlying political and sectarian disputes that drive violence in places like Iraq, Syria, and Yemen.

Katulis wonders how much Trump will value diplomacy given his budget request that increases military spending and cuts State Department funding.

“The U.S. under successive administrations has not used its leverage to achieve their goals in places like Yemen,” Katulis told The Daily Signal in an interview. “The Trump administration would be making a big mistake of simply escalating some military operations in the absence of linking it to a long-term plan to stabilize the country. We could unwittingly be enmeshed in a campaign that contributes to Yemen’s collapse and humanitarian disaster.”

Graham agrees that Trump must accompany military actions with a diplomatic and political plan.

“You never win a war by bombing and leaving,” he said.

As an example of the approach Graham says the U.S. should take to counterterrorism, the South Carolina senator is calling for the Trump administration—if the American-backed coalition is successful in dislodging ISIS—to leave behind a residual force in Iraq to help the country rebuild.

“The U.S. should be part of an international effort to help the Iraqis hold and reconstruct their territory,” Graham said. “I think President Trump is open-minded to the idea.”