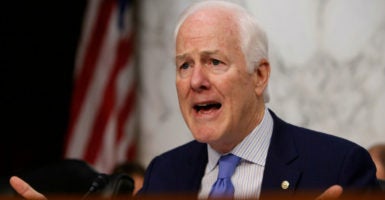 “I doubt there’d be a lot of appetite for dramatic cuts this year,” Senate Majority Whip John Cornyn, R-Texas, told Roll Call. “I just look at it as a conversation. They’ve got their views, we’ve got our views, and we need to sit down and work that out.”

Funding for the federal government will run out during the last week of April. In order to avoid a government shutdown, Congress must pass a spending bill by April 28.

Trump has suggested several ways to trim government spending, and some of the reductions include cutting “$1.3 billion from Pell Grant funding for college students; $1.2 billion from the National Institutes of Health; and $1.5 billion from the Community Development Block Grant program,” according to Budget Tracker.

Some of these cuts are alarming Republicans lawmakers such as Sen. Lamar Alexander. The Tennessee Republican chairs the Senate energy-water appropriations subcommittee. He’s hinting that Trump’s requested budget cuts may go ignored.

“[Trump] suggested some things and of course we’ll look at them, but we’ll write the budget,” Alexander told CQ.

"He suggested some things, and of course we'll look at them, but we'll write the budget," said @SenAlexander of Trump's proposed 2017 cuts https://t.co/AriY4dN1RF

Rep. Tom Cole, R-Okla., who serves as chairman of the House subcommittee on labor, health and human services, education, and related agencies, also suggested that Trump’s requested budget cuts might not be implemented.

“You know that’s fine, but it’s a little late in the process,” Cole told CQ. “We’ve closed out our bills.”

In his “skinny” budget proposal for the next fiscal year, Trump proposed to end taxpayer funding for the Corporation for Public Broadcasting, which supports public TV and radio broadcasters like NPR and PBS.

“This is an agency we all admire,” Cole said, according to Budget Tracker.

The Corporation for Public Broadcasting received $445 million in federal funding in 2016.

According to Budget Tracker, Republican lawmakers appeared skeptical about ending funding for the Corporation for Public Broadcasting. One GOP lawmaker, Rep. Andy Harris of Maryland, questioned if funding the corporation is necessary.

Romina Boccia, deputy director of the Thomas A. Roe Institute for Economic Policy Studies at The Heritage Foundation, told The Daily Signal in an email that the apparent refusal of Republican lawmakers to support Trump’s budget cuts are disappointing.

“For years now, Republicans have told the American people that if only they controlled both chambers of Congress and the executive, they could actually get stuff done,” Boccia said. “Now, we are seeing that those too were apparently empty promises.”