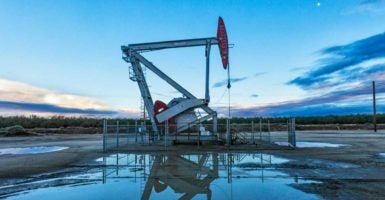 Horizontal drilling and hydraulic fracturing have unlocked vast resources locked up in tight formations, such as shale. (Photo: Peter Bennett/Citizen of the Planet/Newscom)

Richard Sigman is a member of the Young Leaders Program at The Heritage Foundation.

American lawmakers would be wise to embrace the ongoing energy revolution.

The Baker Hughes oil rig count for the United States increased on Friday for the 10th consecutive week to 809 operating rigs, resulting in a 20-rig increase from the week before and a 345-rig addition in the past 12 months.

While OPEC countries have done their best to keep oil prices high by cutting back on production, America’s energy wealth and free markets have frustrated these efforts. The Energy Information Administration pegs current gasoline prices at $2.32 per gallon—down 36 percent from the 2014 high of $3.64 per gallon.

At the Nov. 30 OPEC meeting, member countries agreed to production cuts of 1.2 million barrels per day with the goal of decreasing global inventories and increasing prices.

However, the biggest obstacle between OPEC and its goal of higher prices is American oil production. American producers have taken advantage of elevated oil prices, bringing more rigs online. As a result, American oil inventories have increased by over 41 million barrels since the OPEC announcement.

Greater oil supplies induce downward pressure on prices, which is OPEC’s greatest nightmare as doing so severely limits its ability to raise prices while holding onto market share. In fact, the American shale revolution has fundamentally changed the scene for oil price changes as well as the economy as a whole.

Horizontal drilling and hydraulic fracturing have unlocked vast resources locked up in tight formations, such as shale.

In addition to reducing average production costs, the shale revolution is a classic example of the free market at its best. It is creating work not only for people directly associated with extraction—including engineers and data scientists, among many others—but also for people not directly associated with the work; in industries such as manufacturing, restaurants, repair, travel, and more.

Heritage Foundation research has estimated that unlocking substantial portions of federal land to industry development will create a peak employment differential of 1.5 million jobs by 2035.

The most advantageous effect of the shale revolution is the stimulus to American energy consumption. Stephen Moore, a Heritage Foundation fellow in economics, writes with Kathleen White, a senior fellow at the Texas Public Policy Foundation, in their new book, “Fueling Freedom”: “The rule of thumb is that a 1-cent reduction in the price of gas at the pump saves consumers $1 billion a year.”

As energy is the fundamental building block of civilization, a reduction in energy costs would be evident all across the country. These cost reductions coupled with the vast job creation described above, would result in a stronger economy and a significantly higher standard of living.

Washington policymakers should, therefore, embrace the prominence of the American oil and gas industry in the world market and enable American ingenuity to take advantage of our immense resources.