Why Wisconsin’s Irrational Ban on Outside Butter Needs to Go 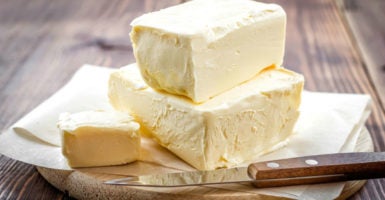 A 1953 Wisconsin law that imposes strict grading regulations on butter products is now blocking some of the world's renowned butter brands from selling in the state. (Photo: iStock Photos)

Two inmates arrive at a Wisconsin jail. One asks the other, “What are you in for?”

“Possession with intent to sell heroin. You?”

The first replies, “That’s it? I’m here for possession with intent to sell butter.”

True enough, this conversation didn’t happen. But it might as well have. Today in Wisconsin, a crony regulatory scheme is protecting local industry from out-of-state competition by threatening retailers with criminal penalties if they sell butter that has not passed a bureaucratic taste test.

Now, Wisconsinites are fighting back with a lawsuit aimed at bringing consumer choice back into their stores.

The regulatory law (Wis. Stat. Ann. § 97.176) dates back to 1953 and makes it “unlawful to sell, offer or expose for sale, or have in possession with intent to sell, any butter at retail unless it has been graded” in Wisconsin or by the U.S. Department of Agriculture.

It requires all butter sold in the state to receive and prominently featured U.S. or Wisconsin quality grade on the package, and strictly prohibits the sale of butter that is ungraded or graded outside of the U.S.

Wisconsin officials boast of a particularly rigorous grading process that evaluates butter based on 32 individual points of quality.

State law (Wis. Stat. Ann. § 97.72(1)) provides that first-time violators are subject to a fine between $100 and $1,000 and up to six months in jail. And should a local grocer dare to sell unlabeled butter a second time, repeat offenders may receive a fine of up to $5,000 and one year in the county lockup.

Kerrygold Pure Irish Butter is a popular, grass-fed alternative to butter produced by the grain-fed cows in Wisconsin. It is the top imported and third most purchased brand of butter in America.

Last year, over $71 million worth of Kerrygold butter was sold in the United States without a single reported health problem.

But it is legally banned for sale in Wisconsin because it is graded in its home country of Ireland, but not in the U.S.

Nevertheless, Kerrygold and other imported butters managed to openly sell in Wisconsin for decades as the Wisconsin Department of Agriculture, Trade and Consumer Protection was derelict in its duty to enforce the butter ban.

Only recently did state officials decide to dust off an old Wisconsin statutes book, warning local distributors that they are prepared to revive enforcement of the obscure state dairy law.

This threat was sufficient to coerce grocery stores into pulling all noncomplying butter products from their shelves.

Admittedly, the Wisconsin Department of Agriculture is not combing the dairy aisle at each supermarket chain to scrutinize its butter selection. It gave retailers fair warning before bringing any enforcement actions. Nevertheless, the threat worked.

While some might think that the removal of select, imported butter brands would go unnoticed, the lack of Kerrygold butter in particular caught the eye and ire of some consumers.

One of those consumers was Jean Smith of Waukesha, Wisconsin, who was up in arms when she noticed that Kerrygold was no longer available in her area. Smith now packs a suitcase full of Kerrygold for personal consumption each time she returns from out-of-state trips.

Transporting butter from out of state is perfectly legal for her to do. The ban only pertains to the sale—or possession with intent to sell—of Kerrygold and similarly situated butter products.

But understandably, Smith hopes she won’t have to bring Kerrygold from out of state much longer.

Conservative lawyers at the Wisconsin Institute for Law & Liberty recently filed a lawsuit against the state on behalf of Smith, several other Kerrygold loyalists, and a specialty food store. They claim that the state butter ban violates the Due Process, Equal Protection, and Free Speech clauses of the Wisconsin Constitution.

According to the complaint, the butter law places an “arbitrary and irrational” burden on the free market and limits competition for local producers “for no reason other than a government bureaucrat has not sampled it and expressed his or her opinion as to its quality.”

The state does have an interest in protecting residents from the ills of contaminated food products. But does the nanny state have a legitimate interest in regulating a trustworthy product out of the market by threatening morally innocent store owners with potential criminal liability?

The complaint alleges that Wisconsin is the only state in America to impose such a burdensome requirement on business owners’ butter selections. Meanwhile, Kerrygold and similar products that comply with all other U.S. food safety standards remain available in the rest of country.

The state must now decide whether to use its limited resources to defend arbitrary and protectionist butter standards. Even if it succeeds, the state must then explain to citizens why their favorite butters are banned and why grocers trying to make an honest living ought to be treated like drug dealers.

That path does nothing to advance the welfare of Wisconsinites. A better path forward: Protect free markets, and protect consumer choice in butter.