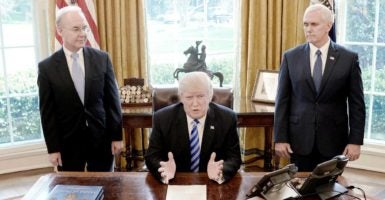 President Donald Trump’s next moves might be some of the most important of his presidency.

“So now we are going to go for tax reform,” @POTUS says.

On Friday, he suffered a legislative defeat on the House bill to replace Obamacare, delivered in part by members of his own party in Congress. Presidential historians say how Trump navigates the health care bill, called the American Health Care Act, pulled for lack of support, could determine the future of his presidency.

Republican leaders decided to pull the bill when it was clear it did not have the votes to pass. Trump talked about moving forward on to another issue—tax reform.

“It was the No. 1 issue for Trump, he picked it,” presidential historian Craig Shirley told The Daily Signal. “If Trump steps forward and says, ‘I’ll do better next time,’ it won’t be debilitating for him. If he points fingers and blames others, it won’t go away.”

During remarks to reporters in the Oval Office Friday afternoon, Trump didn’t blame the House Freedom Caucus or Republican leadership for the health care bill’s failure to pass, but noted not a single Democrat supported the reform.

Shirley, the author of “Reagan Rising: The Decisive Years, 1976-1980,” noted President Jimmy Carter failed to increase the gas tax, reform the federal bureaucracy, and couldn’t get key nominees confirmed—even with a Democratic Congress. These setbacks in the first couple of months “crippled his presidency going forward,” Shirley said.

By contrast, Ronald Reagan was buttressed by big early victories in his first year on tax cuts, budget cuts, shooting down Libyan planes, and built a strong aura of winning.

“Politics is about motion. He can move to another executive order or another piece of legislation,” Shirley said.

Because so much is about perception, Trump might be able to bounce back from a stinging defeat if his nominee, Neil Gorsuch, is confirmed to the Supreme Court, said Dan Mahaffee, senior vice president and director of policy for the Center for the Study of the Presidency and Congress, a nonprofit education group.

“If Gorsuch is confirmed, which is likely, that’s what people would talk about, and it would make wonderful political theater, and Trump, the former TV star, knows the value of that,” Mahaffee told The Daily Signal.

Repealing and replacing Obamacare was a key item in his first 100-day plan. But the plan also included tax cuts, energy policies, and rebuilding the military that a Republican Congress might have more quickly embraced.

Since taking office, Trump has moved aggressively with executive orders on matters such as immigration, infrastructure, and energy. On Friday, Trump announced the final permit for moving forward on construction of the Keystone XL pipeline.

Health care has been such a thorny issue for past presidents, and Mahaffee said Trump might have focused on racking up other legislative victories for momentum—such as tax reform or national security policy.

“Former presidents have sapped so much political capital on health care. Bill Clinton and Barack Obama both lost the Congress over the issue,” Mahaffee said. “Even [George W.] Bush after being re-elected spent his political capital on Social Security reform. That made his push for immigration reform much harder.”

Trump said he expects to return to addressing Obamacare, because it’s going to “explode.”

“It’s going to be an experience that leads to an even better health care plan,” Trump said. He later added, “I know some of the Democrats and they’re good people. I honestly believe the Democrats will come to us and say look, ‘Let’s get together and get a great health care bill or plan that is really great for the people of our country.’”