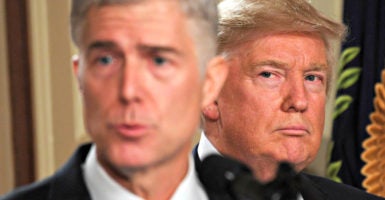 President Donald Trump has moved quickly in trying to fill federal court vacancies, outpacing his immediate predecessors during the first 200 days in office in circuit and district court appointments.

Eleven of the president’s nominations are to circuit courts and 23 are to district courts. The nine others are to specialty courts such as the Court of Claims, the U.S. Court of Appeals for Veterans Claims, and the U.S. Tax Court. While the Supreme Court was a paramount issue during the 2016 presidential campaign, Trump entered office with about twice as many lower court vacancies as predecessor Barack Obama had—presenting an opportunity to reshape the federal bench.

The nation’s highest court hears only a limited number of cases, so appeals court judges and even district judges can have significant sway over judicial precedent.

By comparison, Obama nominated 15 district and 12 circuit nominees during his entire first year in office, as well as nominating Sonia Sotomayor to an open seat on the Supreme Court.

During that first year, Obama scored 10 confirmations by the Senate, including Sotomayor’s. In the first 200 days of 2009, he nominated only five appeals judges and four district judges.

Trump has taken some criticism for not filling executive branch jobs more quickly. But the same cannot be said for appointments to the judiciary, as he is also surpassing Presidents George W. Bush and Bill Clinton in the first 200 days.

Trump entered office Jan. 20 with 105 judicial vacancies, about twice as many as Obama’s 54 openings. And more judges have left the bench over the last half year, bringing the current number of vacancies to 138.

Last week, before going on a two-week “working vacation” at his golf resort in Bedminster, New Jersey, Trump submitted a sixth wave of judicial candidates to the Senate, this time with 10 nominees. The Senate is in recess until after Labor Day.

Although Senate Democrats can’t block Trump appointees to judgeships through the filibuster, as they can with legislation, they have the ability to slow things down.

“When President Trump took office, he faced more judicial vacancies than four of his five predecessors (105), and, because of the obstruction and ridiculous delays Senate Democrats are imposing, there are now more vacancies than there were then (138),” Carrie Severino, chief counsel and policy director of the the conservative group Judicial Crisis Network, told The Daily Signal in an email. The vote on John Bush for the 6th Circuit was the most divided, prompting outrage from liberal groups such as Alliance for Justice.

“Today we’ve witnessed a new low for both the Senate and the federal judiciary. The GOP-led Senate has confirmed to the federal bench a person, John Bush, who has repeatedly denigrated LGBTQ Americans, women, the former President of the United States, and others, using coarse slurs and citing disreputable sources,” Alliance for Justice President Nan Aron said in a statement, adding:

The nomination was rammed through under pressure from Majority Leader Mitch McConnell, who was the beneficiary of millions of dollars raised for his reelection campaign by Mr. Bush’s wife. We commend Democratic Senators who stood in opposition to this nominee; this whole deal reeks, and we feel for the litigants who will have to face Judge Bush in court someday.

Senators voted unanimously in July to confirm David Nye to the U.S. District Court in Idaho. And in a voice vote last week on a a package of various Trump nominees, the Senate confirmed three judges to the Court of Appeals for Veterans Claims: Michael P. Allen, Amanda L. Meredith, and Joseph L. Toth.

“President Trump and his allies in the Senate campaigned on the promise to remake our federal courts, and Senate Democrats are once again proving that they will do just about anything to keep liberal extremists in control of our courts,” Severino said.

During his first year in office, George W. Bush nominated 13 appeals court judges, but only two before his 200th day in 2001. The Democratically-controlled Senate confirmed six that year; the others had to wait until 2002.

Clinton, after securing Senate confirmation of Ruth Bader Ginsburg for the Supreme Court, moved on Aug. 6, 1993, to send three appeals court nominees and 11 district court nominations to the Senate.

By the end of 1993, Clinton had nominated five appellate judges and won three confirmations. He nominated 32 district judges, securing confirmation for 24 during that first year.

Trump supporters have good reason to be hopeful, said Hans von Spakovsky, a senior legal fellow at The Heritage Foundation.

“During his time in office, President Obama appointed 38 percent of the federal judges in the country and was matched closely by George W. Bush,” von Spakovsky told The Daily Signal.

Von Spakovsky said he would like to see Trump have more influence on federal courts:

There is no question in my mind that the individuals Obama picked for the federal courts were the most radical, left-wing ideologues. We need Donald Trump, frankly, to counter that. The White House is looking for young people who will have long stays on the courts.