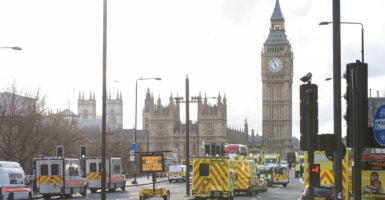 An attacker drove a vehicle into pedestrians on Westminster Bridge, which leads to the United Kingdom’s Parliament. Emergency vehicles responded to the scene. (Photo: picture alliance/Ik Aldama/Newscom)

At least four people were killed, including a police officer and the suspected assailant, and 40 others wounded in a terrorist attack Wednesday in London.

The attacker, Khalid Masood, was a 52-year-old British-born man “inspired by Islamist ideology” whom had a criminal record.

Masood drove a large vehicle into pedestrians on Westminster Bridge, which leads to the United Kingdom’s Parliament, authorities said.

After the vehicle crashed, Masood got out and approached Parliament, where he fatally stabbed a police officer as he tried to enter the building. Police then fatally shot Masood, authorities said.

The Islamic State, the terrorist group also known as ISIS, on Thursday claimed responsibility for the attack.

Heritage Foundation terrorism expert Robin Simcox told The Daily Signal that “anyone who has looked at this [security] issue will tell you that even with the best intelligence, this was going to happen at some point.”

Some of those wounded were teenage schoolchildren from France, The New York Times and other media reported.

Police said they were treating the attack as terrorism. Parliament chambers and offices were placed on lockdown for more than two hours. Both the House of Commons and House of Lords will sit Thursday at their normal times.

The attack, which unfolded around 2:40 p.m. local time, came on the anniversary of suicide bombings in Brussels—claimed by ISIS—that killed 32 people, along with three bombers.

“This is the day we have planned for but we hoped would never happen,” Mark Rowley, the acting deputy commissioner with London’s Metropolitan Police Service, said at a news conference. “Sadly, it’s now a reality.”

Londoners will never be cowed by terrorism. pic.twitter.com/SidIuIztvu

President Donald Trump spoke with British Prime Minister Theresa May to express his condolences over the attack.

I spoke with PM Theresa May of the United Kingdom to offer my condolences on today's terror attack in London….https://t.co/j1Cr3WMuU7 pic.twitter.com/2Jy51T7Kvi

Before Wednesday, Britain had not suffered a major terrorist attack since the rise of ISIS, unlike the U.S., France, Belgium, and Germany. But the United Kingdom long has been an attractive target for terrorists.

British intelligence services, considered some of the best in the world, have foiled planned attacks before they happened.

Long before the most recent threats, Britain maintained a comprehensive, preventive approach to counterterrorism, beginning its efforts shortly after the 2005 bombings by Islamist terrorists of London’s public transport network. That attack is commonly known as 7/7 for the month and day it occurred.

>>>How the British Government Tries to Stop Youth From Becoming Terrorists

“The U.K had escaped the attacks of France and Germany—not because the U.K. is not a target but because it has a world-class intelligence service and collection capacity and the agencies work very well together,” Simcox said.

“Britain has an extremely well-integrated intelligence system,” Simcox continued. “But anyone who has looked at this issue will tell you that even with the best intelligence, this was going to happen at some point. The U.K. is a very high-value target for ISIS. It has had a host of plots thwarted in recent years, and eventually one would get through.”

In 2015, authorities made 35 percent more terrorism-related arrests in the United Kingdom than in 2010. About 800 individuals from Britain have traveled to Iraq and Syria to fight in the conflicts there. Among them was Mohammed Emwazi, a British Arab known as Jihadi John who notoriously beheaded multiple Americans and Britons before he was killed in a U.S. airstrike in November 2015.

Counterterrorism experts say the mode of the Wednesday’s attack—car-ramming and stabbing—are ISIS’ staples and relatively easy to carry out and difficult to stop.

“It’s impossible to stop in a free society because these are very simple attacks,” said Rashad Ali, a U.K.-based resident senior fellow at the Institute for Strategic Dialogue, in an interview with The Daily Signal. “Anyone can drive a car into anything and anyone can find a large knife. It would be completely in line with the kind of attacks we have seen over recent years.”

Indeed, in a December 2016 terrorist attack in Berlin, Germany, an attacker—who pledged allegiance to ISIS—drove a truck into a Christmas market, killing 12 people and injuring 56 others.

In Nice, France, last July, that same tactic was used when a Tunisian resident of France drove a cargo truck into crowds celebrating Bastille Day, resulting in the deaths of 86 people and injuring 434.

ISIS claimed responsibility for that attack as well.

“We don’t know for sure if [the London attack] is ISIS,” said Daveed Gartenstein-Ross, a senior fellow at the Foundation for Defense of Democracies, in an interview with The Daily Signal. “But looking at the ISIS sphere, a lot of the reasons why this stuff works is the attacks that are a little more low grade are harder to protect against than grandiose plots that occurred in the decade following 9/11.”

Gartenstein-Ross and other experts say these types of attacks are becoming more difficult to stop because domestic extremists are able to use encrypted technology to communicate with terrorist groups overseas.

The New York Times recently reported that as ISIS has lost territory in Iraq and Syria, its members are increasingly conceiving and guiding domestic attacks through virtual communications.

“ISIS has operatives where their role is to basically do online what physical recruiters used to do,” Gartenstein-Ross said. “They identify domestic operatives, move them forward to the point where they are ready to carry out attacks, help them prepare propaganda in advance, and even help them do technical things if necessary.”

Experts say these methods make the jobs of already overburdened law enforcement agencies that much harder.

“Law enforcement is the least of the problems,” Gartenstein-Ross said. “They are doing everything they can to stop these plots.”

“You can’t take away from this [London attack] that counterterrorism measures aren’t working,” Ali said. “That isn’t true. They are working because the large-scale attacks are being thwarted. Now isn’t the time for recriminations of groups and knee-jerk reactions. We need to heal before we decide how to respond to this.”

This report was updated to include later numbers on the dead and wounded, and information about the suspected attacker.