As Russia Flexes Muscles in Afghanistan, US Must Not Cede Influence 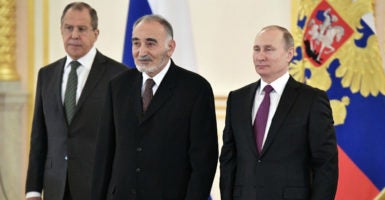 Russia is seeking to gain diplomatic leverage in Afghanistan by hosting a regional meeting next month with governments that have a stake in Kabul’s future.

The U.S. should avoid attending the meeting and instead develop its own plan for driving regional economic and political initiatives that aim to promote peaceful cooperation among Afghanistan and surrounding nations.

Russia has been trying to assert a larger role for itself in Afghanistan over the last several months, taking advantage of a perceived diplomatic vacuum in the region during the U.S. presidential transition. It hosted six-nation talks with Afghanistan, China, India, Pakistan, and Iran in February.

While Moscow has invited Washington to the upcoming talks scheduled for mid-April, the optics of the U.S. merely being a participant at a Moscow-led gathering would send a signal of diplomatic weakness in the region.

The Russians portray their interest in Afghanistan as focusing on stamping out the Islamic State, also known as ISIS, which they assert poses a threat to the broader Central Asia region. There have been reports of the Russians providing some weaponry to the Taliban, and Russian officials have said that the Taliban could be a partner in defeating ISIS in Afghanistan.

But a policy of supporting the Taliban against ISIS is short-sighted and would almost certainly backfire on Moscow.

During his Feb. 9 testimony before Congress, U.S. Afghanistan Cmdr. Gen. John Nicholson discussed Russia’s attempts to undermine the U.S. position in Afghanistan through support of the Taliban and by seeking to portray such support as necessary to defeating ISIS.

Nicholson was clear that the new Russian involvement in Afghanistan is aimed at undermining the U.S. and NATO.

Nicholson went on to note that Russia was creating a “false narrative” that the Taliban has been fighting ISIS in Afghanistan and that the Afghan forces have failed to do so.

In fact, the Afghan army, with support from U.S. forces, has made progress against ISIS bases in eastern Afghanistan. Nicholson also pointed out that ISIS in Afghanistan has little to do with the core group in Syria and is primarily made up of Pakistanis and Uzbeks who have rebranded themselves.

ISIS launched its South Asia branch in Afghanistan in January 2015, calling it ISIS-Khorasan (ISIS-K). Khorasan is an historical term used to describe the area encompassed by Afghanistan, parts of Pakistan, and parts of other countries in the region.

According to the Hadith (sayings attributed to the Prophet Muhammad), this region maintains a key role in establishing a global caliphate, since a major battle between Muslims and non-Muslims supposedly will take place there, heralding the apocalypse and return of the “Mahdi” (redeemer of Islam).

The U.S. must retake the diplomatic initiative in Afghanistan and lead a regional strategy that shores up the Afghan government, prevents the Taliban from gaining more territory, brings the Pakistanis into alignment with U.S. and NATO goals, uproots ISIS bases in the eastern part of the country, and helps create an environment conducive to a peace process.

It is encouraging that the Trump administration may slightly increase U.S. troop numbers in Afghanistan to enhance the U.S.-NATO train and assist mission.

But Washington must also continue to take the lead in diplomatic efforts to bring stability to the country. Otherwise, Moscow’s recent initiatives in Afghanistan will severely undermine U.S. credibility in the region.