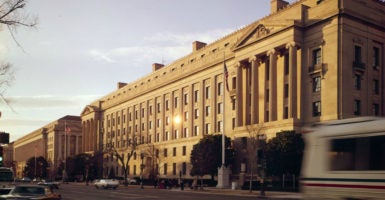 For the past decade, John Fund, J. Christian Adams, and I have been writing about the misbehavior, unethical conduct, and lack of professionalism exhibited by lawyers inside the Civil Rights Division of the U.S. Justice Department, including the Voting Section.

The situation apparently has not improved, given the serious accusations of unprofessional conduct made by 5th Circuit Court of Appeals Judge Jerry Smith in a recent redistricting opinion out of Texas, Perez v. Abbott.

As we outlined in “Obama’s Enforcer: Eric Holder’s Justice Department,” the division has been involved in numerous cases like this.

The cases range from a Louisiana federal judge accusing division lawyers of “grotesque prosecutorial misconduct” in 2013 as well as “skullduggery” and “perfidy,” to the abusive enforcement during the Obama administration of the Freedom of Access to Clinic Entrances Act to intimidate the pro-life movement, to the division being forced to pay more than $4 million in attorneys’ fees during the Clinton administration for filing 11 meritless voting rights lawsuits that were thrown out by federal courts.

The division has an embarrassing history of misconduct.

In March 2013, the Department of Justice inspector general, Michael Horowitz, released an extremely critical report on the dysfunctional Voting Section of the division, including its biased hiring practices, saying it was beset by “polarization and mistrust.”

Among the misdeeds recounted was the commission of perjury by a career employee. The report is a sad commentary on the mismanagement and misbehavior of the lawyers there.

Apparently, none of that has changed. On March 10, a three-judge panel released a decision regarding a Voting Rights Act lawsuit filed against the 2011 congressional redistricting plan for Texas. Two of the judges spend 165 wasted pages describing problems with the plan.

Why wasted? Because as the dissenting judge, Smith, points out, the case was mooted when the 5th Circuit issued a decision in a related case, Davis v. Abbott, in 2015, which the U.S. Supreme Court declined to review. Moreover, the 2011 redistricting plan was repealed by the Texas Legislature in 2013 and replaced with a new plan drawn up by a federal court that was used in the 2014 and 2016 elections.

So no one should squander their time reading the main opinion about a redistricting plan that was never used, and will never be used. But it is worth reading the dissenting opinion.

Smith disagrees with the conclusions of the other two judges that some of the congressional districts violate the Voting Rights Act. His opinion describes the confused dilemma that exists today in trying to distinguish between partisan motivations in redistricting and racial considerations.

That is important to prevent the Voting Rights Act from being used for partisan purposes to protect a political party instead of for its intended purpose, which is to prevent racial discrimination in the voting context.

But more important is Smith’s condemnation of the Justice Department lawyers involved in this lawsuit and the contrast between their behavior and all of the other lawyers in the case.

At the end of his dissent, Smith laments that he “has saved the worst for last, ending unfortunately in a sour note.” The Justice Department’s presence in the case “negatively infected these proceedings.”

Smith is lavish in his praise of both the lawyers from the Office of the Attorney General of Texas who defended the lawsuit, as well as the lawyers for the private organizations and plaintiffs in the lawsuit. Both Texas and the plaintiffs were “magnificently represented by talented counsel.”

The plaintiffs’ lawyers struck the “proper balance between zealous advocacy and professionalism. They generally refrained from taking completely meritless positions, and their briefs and courtroom presentations reflect an advocate’s colorable reading of the law, so they have credibility.”

The state of Texas lawyers “were badly outnumbered,” but they “likewise have aided this court with their skillful advocacy and honest but spirited presentations.” They also cooperated with opposing counsel and refrained “from weak objections to evidence and testimony and have conceded points, where appropriate, as officers of the court.”

Smith said Texas was “blessed to be represented by their attorneys as the plaintiffs are by theirs.”

The same cannot be said for the Voting Section lawyers of the U.S. Justice Department.

According to Smith, the Justice Department lawyers “entered these proceedings with arrogance and condescension.” One of them displayed her contempt for Texas in his courtroom “and her disdain for these proceedings by regularly rolling her eyes at state witnesses’ answers that she did not like, and she amused herself by chewing gum while court was in session.”

Furthermore, it was “obvious, from the start, that the Justice Department attorneys viewed state officials and the legislative majority and their staffs as a bunch of backwoods hayseed bigots who bemoan the abolition of the poll tax and pine for the days of literacy tests and lynchings.” The Justice lawyers “saw themselves as an expeditionary landing party arriving here, just in time, to rescue the state from oppression, obviously presuming that plaintiffs’ counsel were not up to the task.

Adams says that Voting Section lawyers even hung a sign inside the section saying, “Mess With Texas,” mocking the state’s slogan: “Don’t Mess With Texas.”

Smith admits that these are “personal impressions based on demeanor and attitude.” But I experienced the same attitude when I worked in the Voting Section. Career staff there believed all southerners were unrequited racists, and that local and state officials were all Neanderthals.

But what is “objectively verifiable are the witch hunts and fishing expeditions that the [Justice Department] conducted in pursuit of its goals,” according to Smith. He then proceeds to give two examples.

In one, Justice Department lawyers tried to show “blatant and intentional racial discrimination” from an inadvertent error over the location of the residence of one member of Congress, in a manner that Smith said “defies common sense” and was “nothing short of bizarre.”

The lawyers were “mean-spirited” and “wasted substantial time at trial looking for the smoking gun” that did not exist.

In the second example, Smith says that Justice Department lawyers engaged in another “unsuccessful fishing expedition to uncover a smoking gun” because they were determined to find evidence that the legislature had engaged in intentionally discriminatory behavior, despite the fact that there was no such evidence.

Because “it was inadequately prepared, the [Justice Department] called witness after witness, and presented document after document, to try to confect a paper trail from which the court could infer bigotry.”

After three years of litigation and “multiple opportunities for discovery,” the Justice Department “wholly failed, but not for lack of trying.”

Smith said that the Justice Department “overplayed its hand and, in the process, has lost credibility. The wound is self-inflicted.”

Such a loss of credibility has been a steady drain on the department for many years—not just in this case, but in many others. This is just more evidence of the thorny problem Attorney General Jeff Sessions faces in trying to clean up the Justice Department.