European Populism Not ‘Going Away’ Despite Dutch Election Result 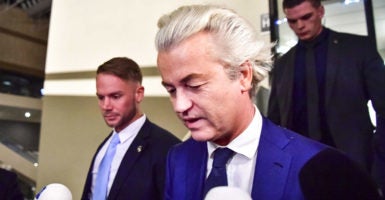 A far-right nationalist party in the Netherlands led by charismatic and controversial leader Geert Wilders failed to score a decisive victory in what was billed as the first electoral test for European populism since last year’s “Brexit” referendum and Donald Trump’s election as president of the United States.

Indeed, Wilders did not meet expectations in the Dutch election Wednesday, according to unofficial results, failing to earn the support of a majority of voters to back his platform of barring Muslim immigration and leaving the European Union.

Though the Dutch result dulls populist momentum—with elections involving rising nationalist parties still to come this year in France and Germany—political observers and experts say Wilders’ defeat does not signal that European populism is waning.

“People will see this result demonstrating that the populist balloon has busted a little bit,” Mathew Burrows, who studies Europe at the Atlantic Council, said in an interview with The Daily Signal. “I don’t see populism going away.”

>>>How Immigration Fueled the Brexit Result

To be sure, the Dutch vote was a relief to centrist and anti-populist politicians across the region.

In the Netherlands’ fractured political system—28 parties ran and 13 are likely to have positions in the 150-seat lower house of Parliament—Rutte will have to form a coalition with others.

But that coalition isn’t likely to include Wilders’ Party for Freedom despite the fact he is expected to finish second, with 20 seats, an increase of eight. Dutch Prime Minister Mark Rutte of the People’s Party for Freedom and Democracy retained his grip on power, but he still must form a coalition government. (Photo: Remko De Waal/EPA/Newscom)

That’s because other parties consider Wilders’ views to be so toxic that they have refused to govern with him in a coalition.

“The center is holding—that’s the essential message of the Dutch election,” Ivo Daalder, president of the Chicago Council on Global Affairs, said in an interview with The Daily Signal.

“The politics in Europe over the last year and a half seemed to be running away from the center, and away from the establishment and elite,” added Daalder, who previously was the U.S. ambassador to the North Atlantic Treaty Organization and served on the National Security Council as director for European Affairs.

“But the Dutch voted for pro-system parties that are pro-EU [European Union] and support sensible immigration policies and free trade,” Daalder said. “So an essential part of the message of the post-World War II period is retained, and that’s an important message.”

‘Move to the Right’

Yet observers based in the Netherlands say Wilders’ proposed policies have had impact, forcing politicians such as Rutte to shift their positions to the right—especially on immigration—to appease a portion of the electorate that is apprehensive about rising migration from non-Western countries.

Wilders has called for banning the Quran and for closing mosques and Islamic cultural centers and schools.

We were the 3rd largest party of the Netherlands.

Now we are the 2nd largest party.

Next time we will be nr. 1! pic.twitter.com/lKN5CFUhPT

“His radical positions have forced parties ideologically close to his to try to accommodate those stances,” Bert Bakker, a communications professor at the University of Amsterdam, said in an interview with The Daily Signal. “Other parties moved a bit to the right on immigration.”

The Netherlands’ immigration policy is among the toughest in the EU, Bakker says, and Rutte’s rhetoric and recent actions—which have included a spat with Muslim-majority Turkey—have become more hardline.

Bakker notes that Wilders—a veteran of parliament who first got elected in 1998—is not the first Dutch politician to target immigration and Islam.

List Pim Fortuyn, a party led by Pim Fortuyn, a gay conservative critical of immigration and Islam, won 26 seats in 2002, more than Wilders’ peak of 24 seats in 2010. Fortuyn was assassinated on the campaign trail, just days before the 2002 election.

“We have seen a revolt against multiculturalism earlier,” Bakker said. “That’s part of our brand as a country.”

Like other European countries, the Netherlands has been affected by the surge of asylum seekers and refugees fleeing war and poverty in the Middle East and Africa.

According to the Netherlands Institute for Social Research, a government research agency, non-Western immigrants rose from 7.6 percent to 12 percent of the Dutch population between 1996 and 2015.

The total population of the Netherlands grew by more than 110,000 in 2016, driven by a net migration of 88,000—mostly from Syria—according to the Dutch Central Bureau of Statistics.

Conservative politicians in some European countries—and Trump, among others in the U.S.—have criticized the EU for its initial response to the refugee crisis, especially Germany’s Angela Merkel.

Merkel, who is scheduled to meet with Trump in Washington on Friday, allowed tens of thousands of asylum-seekers from Syria and elsewhere in the Middle East to enter Germany. Merkel’s governing coalition praised the Dutch election result.

“One of the biggest takeaways from this election is that mass immigration, border control, and the Islamist threat will remain as major issues in elections across Europe, especially in France,” said Nile Gardiner, an expert on transatlantic relations at The Heritage Foundation.

James Jeffrey, a former U.S. ambassador to Iraq and Turkey who also has held diplomatic posts in Europe, predicts that populists in Europe, including France’s Marine Le Pen, will face challenges in actually taking power despite their growing sway.

“The far right will not be successful in seizing power,” Jeffrey told The Daily Signal. “They will continue to scramble politics, but many of these European countries are far more left wing and international and multicultural than the progressives we see in the U.S. These people are gonna fight like hell to preserve that. For them, these are values, this is peace, and they see themselves as the alternative to the 19th and 20th century in Europe.”

While cheering the center’s hold on power in the Netherlands, Daalder, the former ambassador to NATO, says politicians should pay attention to the underlying grievances that are inspiring populism and resistance to an integrated Europe.

“The sentiment of these people doesn’t disappear in any one election,” Daalder said. “The task of all governments whether populist or not is to address that anxiety. There is no doubt the next Dutch government will continue to demand a clawback of power from Europe. The reality of politics hasn’t changed.”