How Immigration Fueled the Brexit Result 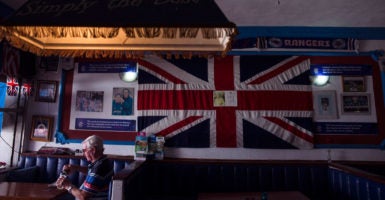 A debate over immigration fueled emotion in the vote over whether Britain should stay in the European Union. (Photo: Jorge Zapata/EPA/Newscom)

The vote by Britons on Thursday to leave the European Union doubled as a referendum on how the country views the issue of immigration.

With immigration at an all-time high in Britain, voters concerned about related issues such as economic uncertainty and sovereignty decided to shed their national identity by voting to upend 43 years of life inside the European Union.

The tension over immigration is similar to what’s playing out in the United States, but different in an important way, in that Britain, as a European Union member, has no control of its borders.

That’s because as long as Britain is in the European Union, it has to allow anyone from the 28-member bloc to live and work there.

According to experts, Britain has experienced the changing face of immigration over the years.

Stephen Booth, the co-director of Open Europe, a nonpartisan think tank based in London and Brussels, said that of the roughly 5 million net immigrants to the United Kingdom between 1990 and 2014, over three-quarters came from outside Europe.

But immigration from the European Union now makes up nearly half of the United Kingdom’s net inflow, Booth said. The combination of European Union expansion in 2004 and 2007—which brought in poorer countries like Bulgaria, Romania, and Poland—and the Eurozone economic crisis has influenced substantial internal immigration to Britain and its relatively strong economy.

“The evidence is that immigration does not have huge economic effects either way,” Booth said in a response to emailed questions from The Daily Signal. “There has been major changes to some areas of the country which are not used to immigration—new shops, languages, etc. Some people view this positively, others feel threatened by the change.”

“EU migrants make a fiscal contribution to the U.K., but the public is concerned that investment in public services, housing, and infrastructure has not kept pace and in some local areas integration is a challenge,” Booth added. “There is a particular concern about low-skilled migration, which can hold down wages for the lowest paid and increase competition for low-paid jobs.”

Yet Booth said policy changes such as the relaxation of restrictions on non-European migration in the late 1990s, and European Union expansion, were not preceded by appropriate public debate and that it is “not unreasonable” for Britons to clamor for greater control over who enters the country.

“[This is] particularly true when the government has promised to reduce numbers,” Booth said. “There is a feeling that politicians have promised something but are not delivering.”

Booth and other experts predict that Britain, split from the European Union and its ethos of free movement, will pursue a more selective immigration policy geared toward attracting skilled migration, based on the needs of the country.

“A ‘Brexit’ will result in a more global-based immigration policy attracting the best talent from around the world,” said Nile Gardiner, the director of The Heritage Foundation’s Margaret Thatcher Center for Freedom.

“This is not about isolation,” Gardiner told The Daily Signal. “It’s about creating a better system for the British economy.”

Under this model, an immigrant is “scored” or valued based on skills and qualifications to contribute to the economy. Those who reach a certain threshold would be eligible for a visa.

The government would prioritize industries and employers with skills shortages.

Booth argues this method is more nuanced than it seems, though.

In addition, the result of Thursday’s referendum won’t bring instant change—on immigration or anything else.

The process of breaking apart begins when the government acts on a provision known as Article 50, which sets a two-year deadline for negotiating the departure.

Gardiner contends that Britain will struggle even more to contain immigration during the two-year negotiating period, since people will seek to cross its borders while they still can. Britain cannot legally deny migrants entry before the withdrawal formally takes place.

“There is a big fear factor here,” Gardiner said. “You will see a lot of Europeans moving to Britain in that period. I’m not sure there’s anything you can do to stop that.”

Both experts note that whether Britain is separate from the European Union or a part of it, the country will continue to feel the impact of immigration.

“Despite public pressure to reduce migration, there are several reasons why net immigration is unlikely to reduce much,” Booth said.

“[That’s because] of the effects of globalization on migration flows, which the U.K. is not alone in experiencing, and the likelihood of some constraints on U.K. immigration policy under a new arrangement with the EU.”