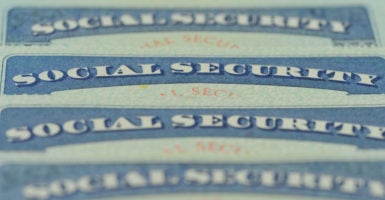 As President Donald Trump is preparing his first budget submission to the Congress, he should consider making Social Security reform a priority.

The future of the Old-Age and Survivors Insurance and disability programs, and their impact on American families, the federal budget, and the economy, are issues too big to ignore. Social Security reform is needed, and ever more urgently.

Social Security is fiscally unsustainable. The primary program under Social Security—the Old-Age and Survivors Insurance Program—has been running cash-flow deficits for the past six years, meaning it has to cash in IOUs from the federal treasury and thereby increase the national debt.

The Social Security trustees project that the trust fund will run dry by 2035, and potentially sooner, according to Congressional Budget Office projections.

Either way, waiting to reform the program should not be an option because the magnitude and gravity of changes necessary to Social Security only grow larger the longer Congress and the president delay reform.

Absent reform, the Social Security trustees predict that benefits would have to be cut by 23 percent across the board when the trust fund runs dry. Without changes to benefits, American workers could be faced with a 33 percent  increase in their payroll taxes, putting a serious strain on middle- and lower-income workers.

Eliminating the payroll tax cap, as some are proposing, would have damaging economic consequences without guaranteeing a secure financial future for the program. Tax increases are not the answer.

Driving Up the Deficit

In 2010, Social Security started paying out more money in benefits than it received annually in taxes. At the current rate, the program will accumulate more than $1 trillion in deficits over the next 10 years.

Social Security’s trust funds are only solvent on paper. In reality, the funds to pay benefits, in excess of what the program receives from taxes, come from general revenues—or in the case of federal deficits, from additional borrowing. Besides the financial woes, Social Security is outdated and ineffectively targeted.

In addition, benefits are not necessarily going to those who need them most.

The Social Security benefit structure is very complex, and the program is rife with perverse incentives and benefits that undeservedly reward higher-income families more, such as through outdated spousal benefits.

The Path to Reform

The Social Security Reform Act of 2016, a bill introduced by Rep. Sam Johnson, R-Texas, in the last Congress, is a good place to start. The bill would make several progressive changes to how benefits are calculated, along with a gradual increase in the retirement age to 69.

These proposals would help to better target benefits toward lower-income workers, while reducing work disincentives and making Social Security financially solvent without any tax increase.

And yet, Congress should go even further.

A bolder proposal would consider reducing Social Security’s payroll tax burden over time, or allowing individuals to opt out of a portion (or all) of their payroll taxes (and benefits) to control their own retirement savings as they deem best.

Trump is in a unique position to assuage the fears of vulnerable American seniors and those with disabilities that their benefits will be there for them, while also pursuing sensible reforms to ensure future benefits are sustainable and do not burden younger generations with undue taxes and debt.

Together with Congress, the president can help to secure a financial and prosperous future for older and younger generations.