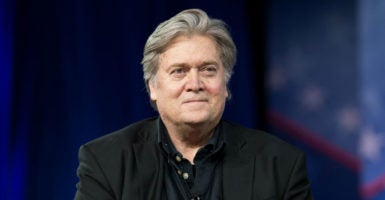 In his first public remarks since the election, White House Chief Strategist Steve Bannon recently told a packed house at the Conservative Political Action Conference (CPAC) that the “deconstruction of the administrative state” was one of the major goals of the Trump administration.

In so doing, Bannon took aim at our modern form of government, in which legislative, executive, and judicial powers are delegated to myriad agencies and bureaus that have come to comprise a fourth branch of government.

For constitutionalists of all stripes, the administrative state undermines the idea of representative government by empowering bureaucrats at the expense of legislators.

But many on the left were troubled by Bannon’s comments, to say the least.

Kevin Drum of Mother Jones, for instance, heard racist undertones lurking behind Bannon’s call. “Bannon’s ‘deconstruction,’” Drum wrote, “appears to encompass a war against Muslims, secular humanists, liberal Catholics, and maybe Jews. But it’s so crude to say that out loud, isn’t it?”

“This is a war on a century’s worth of work to keep our air and water clean; our food, drugs, and workplaces safe; the rights of employees protected; and the marketplace fair and unrigged,” he claimed.

The Trump administration’s actual rationale for taking on the administrative state is not nearly so draconian.

First, getting a handle on the torrent of regulations streaming from the administrative state will spur economic growth. As Bannon said during his CPAC remarks, “every business leader” President Donald Trump’s staff has met with “is saying [the problem is] not just taxes, but it is also the regulations.”

Bannon is right. Under President Barack Obama, the Code of Federal Regulations reached 170,000 pages, and all that red tape costs our economy dearly. The National Association of Manufacturers estimated that regulations cost the U.S. economy $2 trillion every year.

The National Small Business Association determined that an average small business spends about $12,000 to comply with regulations every year. Companies have to spend nearly seven times this amount—about $83,000—in the first year of their existence as they jump through all the regulatory hoops required to start a new business.

While government should certainly establish and enforce rules of the road when it comes to commerce, it should not stop traffic altogether.

The second reason Bannon says the Trump administration must confront the administrative state is that it takes control of the government away from its people.

As he said from the CPAC stage, “The way the progressive left runs, is if they can’t get it passed, they’re just going to put in some sort of regulation in—in an agency.”

Again, Bannon is correct. Losing control of Congress in 2010 was merely a speed bump for Democrats. When a bill that would have tightly limited carbon dioxide emissions failed to make headway in Congress, the Environmental Protection Agency wrote a regulation that would have the same effect. The Environmental Protection Agency had over 15,000 full-time employees in 2016. (Photo: Johannes Schmitt-Tegge/dpa/picture-alliance/Newscom)

Forcing school districts around the country to allow transgender individuals to use the bathrooms and locker rooms of their choice would be a nonstarter with most elected officials, but not for Washington bureaucrats. In 2016, the Department of Education directed school districts across the country to allow students to use facilities “consistent with their gender identity.”

The progressive response to Bannon’s comments would have made sense 100 years ago when the administrative state was still in its infancy. At that time, 1 in 10 steelworkers were injured or killed on the job every year, the Chicago River was so clogged with sewage that it easily lit ablaze, and 10,000 people a year died of salmonella food poisoning.

Due in part to tough laws and strictly enforced regulations, that is not what America looks like today.

Today’s U.S. Department of Agriculture regulators do not just test for bacteria in meat. They also restrict the amount of their own product farmers can bring to market.

Regulators at the Occupational Safety and Health Administration do not just protect workers from serious injury. They also dictate the sort of latches that dustbins in bakeries are required to use.

The EPA does not simply keep our air and water clean. It also prevents people from building homes if they happen to live near a backed up drainage ditch (which qualifies as a “wetland,” according to the agency’s definition).

After 100 years of unhindered sprawl, this is where the administrative state stands today. It’s time for the pendulum to swing the other direction.