The US Needs a New Foreign Aid Model 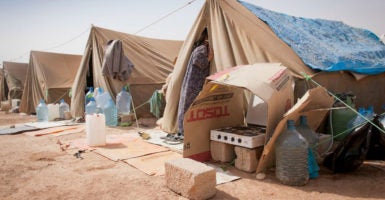 The Millennium Challenge Corporation was specifically designed to counter corruption among foreign aid recipients, but has morphed into a more generic aid program in recent years. (Photo: iStock Photos)

In recent days, Heritage Foundation scholars have reported on the significant cuts said to be included in President Donald Trump’s proposed fiscal year 2018 budget for the State Department, the U.S. Agency for International Development, and other foreign policy-related federal agencies funded by the foreign operations appropriation.

Those scholars rightly argued that alarmism about Trump’s foreign aid revamp is ill-considered and premature. In fact, if applied smartly, those cuts could actually boost core U.S. foreign policy objectives.

In any case, as the meat ax justifiably falls on ineffective U.S. aid programs around the world, one program deserves a second look: the Millennium Challenge Corporation.

President George W. Bush created this taxpayer-funded corporation in 2004 specifically in response to the problem of corruption among U.S. foreign aid recipients. It was to be the new model for 21st-century U.S. government development assistance—one that included non-negotiable demands that U.S. foreign aid recipient countries be held accountable to reduce their levels of corruption and strengthen their governmental institutions as a condition of receiving grants.

Decades of evidence analyzed by experts such as New York University professor William Easterly point to an irrefutable conclusion. As The Economist put it, “foreign aid is failing.” Crooks steal it. The Economist continues:

As The Heritage Foundation’s annual Index of Economic Freedom demonstrates year after year, it is not government assistance programs that lift people out of poverty and into sustainable jobs. It is private sector-led trade and investment.

That is what the Millennium Challenge Corporation’s “challenge” is all about. How to create a better investment climate, one where reliable and transparent rule of law can instill investor confidence.

Several of the countries who won early Millennium Challenge Corporation “compacts” benefitted from that sort of progress. Development experts began to speak of “the MCC effect.”

Unfortunately, the Millennium Challenge Corporation drifted away from its original rule of law priorities during the Obama years, becoming nearly indistinguishable from USAID.

Let’s hope the Trump administration’s fiscal year 2018 budget abandons the discredited foreign aid programs of the past and refocuses the Millennium Challenge Corporation on its original, market-oriented approach and emphasis on the rule of law.