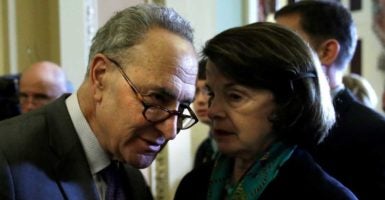 In light of Attorney General Jeff Sessions recusing himself from the Russian investigation, a government watchdog group is asking every senator to provide a list of ambassadors they met with over the past three years.

“No prosecutor would ever bring that case,”@factdc says.

A spokeswoman for Sessions said that as a senator he had 25 conversations with ambassadors in 2016, including those representing Britain, South Korea, Japan, Poland, India, China, Canada, Australia, and Russia.

Matthew Whitaker, a former U.S. attorney for the Southern District of Iowa, now executive director of the Foundation for Accountability & Civic Trust, a watchdog group, said he has asked other senators to be transparent about their meetings.

“I think, in a sense, [meetings with foreign ambassadors to the United States] is fairly routine in the House and Senate, particularly in the Senate,” Whitaker told The Daily Signal. “It would be revealing to see how many meetings other senators have had.”

After federal investigators examined contacts between Sessions and Russian Ambassador to the United States Sergey Kislyak from last year, Sessions announced Thursday he would recuse himself from any investigation into Donald Trump’s presidential campaign.

Several news accounts say that Kislyak wasn’t shy about interaction with other senators. The Washington Post noted that Sen. Claire McCaskill, D-Mo., met at least twice with him—in 2013 and 2015, highlighting her tweets about the meeting.

Off to meeting w/Russian Ambassador. Upset about the arbitrary/cruel decision to end all US adoptions,even those in process.

Fox News analyst Brit Hume said that Sen. Dianne Feinstein, D-Calif., one of the biggest critics of the Sessions meeting, also met with the Russian ambassador.

The last time I was in the Senate dining room, Feinstein was having lunch with the Russsian amb. I never gave it a second thought. https://t.co/azR0M5LrkK

Democrats accused Sessions of misleading the Senate Judiciary Committee during his confirmation hearings to be attorney general when he said he did not meet with Russians as a surrogate for Trump.

There were two meetings, one in Sessions’ office and another at a Heritage Foundation foreign policy forum held in coordination with the State Department in Cleveland for foreign ambassadors during the week of the Republican National Convention.

Senate Minority Leader Charles Schumer, D-N.Y., and House Minority Leader Nancy Pelosi, D-Calif., have called for Sessions to resign from office for what he told the Senate committee about the Russians.

Whitaker said he doubts Sessions’ testimony could ever amount to a perjury charge. Such a charge would have to prove he was willfully and intentionally lying and would also have to be material to the subject at hand—in this case, his confirmation as attorney general.

“Based on that we know now, I do not see any charge of lying to Congress under oath,” Whitaker said. “No prosecutor would ever bring that case. If you watch the question in context, it was clear he was answering about the campaign. If he was asked about a meeting as a senator, I believe he would have answered differently.”

Whitaker argued the wording of the question and Sessions’ answer are important.

CNN just published a story alleging that the intelligence community provided documents to the president-elect last week that included information that quote, ‘Russian operatives claimed to have compromising personal and financial information about Mr. Trump.’ These documents also allegedly say quote, ‘There was a continuing exchange of information during the campaign between Trump’s surrogates and intermediaries for the Russian government.’ Now, again, I’m telling you this as it’s coming out, so you know. But if it’s true, it’s obviously extremely serious and if there is any evidence that anyone affiliated with the Trump campaign communicated with the Russian government in the course of this campaign, what will you do?

Sen. Franken, I’m not aware of any of those activities. I have been called a surrogate at a time or two in that campaign and I didn’t have—did not have communications with the Russians, and I’m unable to comment on it.

The White House rejected that either meeting between Sessions and the Russian ambassador is evidence of a conspiracy.

“Please explain to me how volunteers meeting at a conference where nearly 80 ambassadors attended is a story,” White House spokeswoman Sarah Sanders told reporters Friday en route to Orlando aboard Air Force One, according to the pool report.

“I guess it’s kind of lost on me where that would be newsworthy in any capacity,” Sanders continued. “I mean Chuck Schumer sitting and having drinks with [Russian President Vladimir] Putin and that’s not a news story, but apparently a volunteer for a campaign bumping into [an ambassador] at a conference where there’s, again, dozens of other ambassadors is newsworthy?”

Sanders was referring to another a photo from 2003 of Schumer and Putin together in New York that Trump tweeted out.

I hereby demand a second investigation, after Schumer, of Pelosi for her close ties to Russia, and lying about it. https://t.co/qCDljfF3wN

“As a senator, he obviously in his official capacity met with the ambassador,” Sanders added. “Again, that was as a senator, not as a campaign official, so again, to try to muddy the waters in that way is, I think, pretty unfair to the attorney general.”