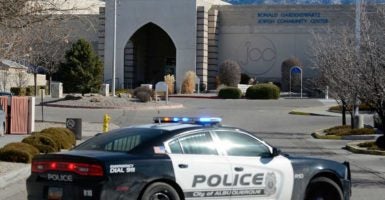 A man arrested and charged with issuing threats against Jewish establishments has been identified as an anti-Trump journalist previously fired for falsifying news stories.

ABC News reported that 31-year-old Juan Thompson, a St. Louis resident, is charged with making a minimum of eight threats across the country targeting Jewish community centers, schools, a Jewish civil rights organization, and a museum in a “campaign to harass and intimidate” a woman he had been in a relationship with.

Thompson, who said he voted for Bernie Sanders, has publicly expressed antipathy toward Donald Trump and his backers. In January, he tweeted that Americans who approve of the president’s job performance are “filthy fascist appeasers” who “should be taken out along with Trump.”

As recently as Monday, Thompson tweeted out a message about the anti-Semitic bomb threats, saying, “Another week, another round of threats against Jewish [people]. In the middle of the day, you know who’s at a [Jewish community center]? Kids. KIDS.”

Federal prosecutors and the FBI brought the charges Wednesday in an arrest warrant against Thompson before a U.S. magistrate in New York. He was arrested Friday morning in St. Louis.

Thompson is a former reporter for The Intercept, a news website that published an article this week accusing Trump of refusing to “accept that his allies are targeting Jews.”

The Intercept since has changed the headline of its article and acknowledged that one of its former writers was accused of being responsible for some of these anti-Semitic threats.

Thompson worked at The Intercept from 2014 to early 2016, when he left the company after he was caught fabricating quotes and sources.

According to a local St. Louis newspaper, the Riverfront Times, one of the worst examples of Thompson’s unethical journalism was the fabrication of a quote from a cousin of convicted killer Dylann Roof who reportedly does not exist. Roof, who is white, shot and killed nine people, all black, during a Bible study in a church in Charleston, S.C.

Thompson, who is black, wrote briefly for the website Media Blackout USA last year, but was fired after the outlet learned of his questionable history, according to the Riverfront Times.

On Twitter, Thompson accused his former girlfriend of instigating the threats in his name, saying: “Know any good lawyers? Need to stop this nasty/racist #whitegirl I dated who sent a bomb threat in my name & wants me to be raped in jail.”

From Hillary Clinton to the Anti-Defamation League, a Jewish civil rights organization that was threatened by Thompson, calls for Trump to condemn and disassociate himself from the anti-Semitic threats became common over the last few weeks.

BuzzFeed News reported on Trump’s comments on the anti-Semitic incidents this week:

Asked about the recent wave of anti-Semitic attacks and threats across the nation, President Trump on Tuesday told a group of state attorneys general that “sometimes it’s the reverse,” Pennsylvania Attorney General Josh Shapiro said of Trump’s comments in his and other officials’ meeting with the president.

“He just said, ‘Sometimes it’s the reverse, to make people—or to make others—look bad,’ and he used the word ‘reverse’ I would say two to three times in his comments,” Shapiro said. “He did correctly say at the top that it was reprehensible.”

Trump also said in a joint press conference with Israeli Prime Minister Benjamin Netanyahu: “We are going to do everything within our power to stop long-simmering racism.”

This report has been modified with additional details.