Proponents of ‘Diversity’ Tried to Force My Religious Group Off Campus 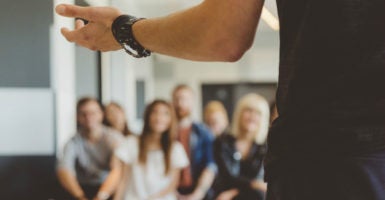 On many campuses, religious groups that require their student leaders to believe and uphold the groups' beliefs and mission are being accused of bigotry and kicked off campus. (Photo: iStock Photos)

Nii Abrahams is an alumnus of Missouri State University and a former Chi Alpha student leader.

Recent news about U.S. colleges has not been flattering. We’ve seen a tidal wave of stories from campus protests and violent riots, to sexual assault and purported millennial “safe spaces.”

But obscured by the attention-grabbing headlines is the reality that many students are actively engaged in campus communities that foster cultural and intellectual diversity, encourage innovative thinking, and create opportunities for enriching and helping others in their campus communities and around the world.

I know, because that’s part of my story.

As a student at Missouri State University, I was first a member, then a leader, of Chi Alpha—a student Christian organization devoted to supporting students of faith and promoting campus diversity and community service.

As one of the most engaged students on campus, the best part of my college experience was seeing the huge variety of student groups—faith-based or otherwise—working, sometimes together and sometimes independently, to promote and act on shared values that were important to each groups’ members.

More than any class assignment, the interaction with students and interest groups allowed me to see that all groups on campus, even those with diametrically opposing viewpoints, can flourish under the same university banner.

Yet politicians and campus administrators in some states are trying to push certain groups off campus for daring to be distinct. Religious groups that require their student leaders (not general members) to actually believe and uphold the groups’ beliefs and mission are being accused of bigotry and kicked off campus.

In a puzzling irony, this aggressive ideology only sacrifices true campus diversity and academic freedom in the name of ambiguous and subjective political correctness.

My participation and leadership in Chi Alpha showed me the true value of campus diversity. While Chi Alpha is religious in nature, I interacted and became friends with students who chose to be a part of Chi Alpha for a safe and uplifting social environment.

Some joined Chi Alpha to participate in our shared ethos of community service and humanitarian efforts, like our partnership with feedONE, feeding starving children worldwide. Other students valued our work promoting campus diversity.

I personally led multiple service trips, like taking Chi Alpha students to work with the homeless in Milwaukee, the widowed and orphaned on a New Mexico Navajo reservation, and neglected elementary school children in Kenya.

For all of us, our shared Christian faith fostered a commitment to each other and to caring for others no matter who they are or where they come from.

Whether motivated by faith or not, all students should be free to join their own groups to express shared values. But faith-based groups are especially being targeted. Two recent examples come to mind.

Just last year at Southeast Missouri State University, virtually every religious student group on campus was discriminated against because the groups required their leaders to share their faith (to essentially practice what they preach) while other campus groups like fraternities and sororities were allowed to continue selecting both leaders and members based on the groups’ mission or purpose.

Only after months of lobbying (and months of academic distractions) were religious students at the university able to regain equality with the other campus groups.

Despite 40 years of service within the Cal State community, including assisting the school with international students, helping campus police hand out free water during major student activities, and fundraising to address issues like human trafficking, Travis and her friends were singled out, denied the ability to function equally alongside other student organizations, and literally locked out of their meeting space.

All this because they required their leaders (again, not their students) to uphold the group’s mission and purpose.

These are just two examples. Similar problems are going on in Florida, Indiana, Maine, New York, and Washington. All across the country, religious organizations are being scrutinized and investigated for a leadership philosophy that almost all groups with student leaders share.

The only difference is that the religious nature of these groups make it easier for misinformed, misguided administrators to yell “foul play.”

A true commitment to academic freedom, diversity, and intellectual engagement (objectives that all colleges and universities say they desire) requires giving students and groups the ability to operate freely as they add value to their campuses by sharing their unique perspectives—religious or secular.

The world is a complex place. Forcing certain groups off campus and thus shielding students from ideas in college won’t help students adequately prepare for the increasingly diverse world ahead of them.

All student groups—even those who require their leaders to uphold their mission to adequately function—must have an equal place at the table.