Trump’s Progress So Far on 2016 Promises 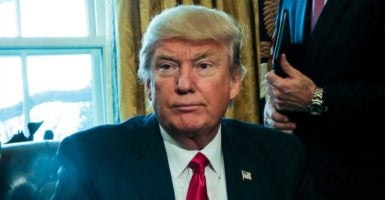 President Donald Trump hasn’t yet repealed and replaced Obamacare, or achieved 4 percent economic growth just shy of one month in office. But the new president has begun to deliver on several other campaign promises.

Here’s a look at progress and achievements in three broad categories for action that Trump routinely talked about during the campaign, including a total of 13 promises:

Trump, on Jan. 27, announced the Manufacturing Jobs Initiative to gather “some of the world’s most successful and creative business leaders to share their experience and gain their insights.”

Trump hosted Intel CEO Brian Krzanich on Feb. 8 at the White House. Krzanich announced the company will build a factory in Chandler, Arizona, that will create 3,000 jobs and another 10,000 “indirect” jobs for area residents.

Just four days after taking office, Trump issued presidential memorandums on two major oil pipelines. He signed one to expedite building the Dakota Access pipeline, which the Obama administration had stalled, and another to encourage construction of the TransCanada Keystone XL pipeline, which the Obama administration had halted.

This promise centers on tax reform, regulatory reform, and what the administration calls sensible infrastructure.

Trump issued a presidential memorandum for a regulatory freeze until the agency head appointed by the president has reviewed the regulation.

Trump made building or repairing infrastructure and boosting manufacturing central to his campaign.

In another presidential memorandum, Trump directed departments and agencies to support expanded manufacturing through streamlining permitting reviews and reducing regulations.

On Jan. 30, just 10 days into his presidency, Trump issued an executive order requiring that for every new regulation the government imposes, it must rescind two.

The same day, he issued an executive order to “strengthen enforcement of federal law to thwart transnational criminal organizations” such as gangs, cartels, and racketeers.

Trump has indicated he will ask Congress for an initial payment to build a wall at the border with Mexico—a project already authorized under the 2006 Secure Fence Act. After that, he said, he will seek reimbursement from the Mexican government.

On Jan. 25, Trump signed a series of executive orders regarding immigration, his signature issue during the campaign. One order called for “immediate construction of a physical wall on the southern border, monitored and supported by adequate personnel so as to prevent illegal immigration, drug and human trafficking, and acts of terrorism.”

Trump also issued an order scaling back funding for “sanctuary cities,” the term for municipalities that refuse to cooperate with federal officials in enforcing immigration law.

The administration calls this approach “extreme vetting,” but critics charge it is a “Muslim ban.” The 9th U.S. Circuit Court of Appeals in San Francisco last week upheld a temporary restraining order blocking enforcement of the measure.

Trump signed a memorandum Jan. 27 calling for “rebuilding of the U.S. armed forces.”

On Jan. 28, Trump signed a memorandum requiring a comprehensive plan to defeat the Islamic State, the terrorist army also known as ISIS, by the end of February. He directed that it include new defense strategies and any needed changes in public diplomacy efforts.

Though it wasn’t related directly to the Iran nuclear deal negotiated by the Obama administration, the Trump White House signaled a strong shift in attitude toward Iran.

The Trump administration, through the Treasury Department, on Feb. 4 imposed 25 sanctions on individuals and companies with ties to Iran in retaliation for the Islamic regime’s ballistic missile tests.

Hours after being sworn in, Trump issued an executive order directing agencies to act to minimize the burdens of the Affordable Care Act as much as possible by law, until Congress votes to repeal and replace the health care law.

On Jan. 28, Trump issued an executive order requiring federal agencies to demand “ethics commitments” from employees hired on or after Jan. 20. This means these employees are committed contractually not to become lobbyists within five years of leaving government, and never to work as a lobbyist for a foreign entity after leaving government service.

In a rarity this early in his presidency, Trump on Feb. 4 signed a bill passed by Congress to allow the Government Accountability Office to gather more records from federal agencies during investigations.

Three days after his inauguration, Trump signed a memorandum to freeze federal hiring except for reasons of national security and public safety.

This includes promoting American exceptionalism and founding principles. Three days after taking office, Trump signed a memorandum ordering withdrawal of the United States from the Trans-Pacific Partnership, a trade deal with 11 other countries. The Obama administration entered into the pact but the Senate had not ratified it. Many Republicans supported the trade deal and many Democrats opposed it, but lawmakers’ positions did not fall along party lines.

When Trump issued executive orders on the Keystone and Dakota oil pipelines, he issued another order requiring new pipelines to be constructed with steel and other raw materials made in the United States.

Promise 12: Nominate a Supreme Court Justice in the Scalia Mold

Trump vowed to name a like-minded successor to Justice Antonin Scalia, who died a year ago Monday. On Jan. 31, Trump announced his nomination of 10th U.S. Circuit Court of Appeals Judge Neil Gorsuch to the Supreme Court to fill the vacancy left by Scalia’s unexpected death. Trump pledged during the campaign to nominate someone with a judicial philosophy similar to Scalia’s originalism.

Trump has yet to take action on this front, but the Senate confirmed his nominee for education secretary, Betsy DeVos, and she started work Feb. 7.

DeVos was the head of the Foundation for Excellence in Education, founded by former Florida Gov. Jeb Bush, a strong proponent of Common Core. DeVos has primarily advocated school choice programs to compete with failing public schools.

After Trump nominated her for the position, DeVos explained that she had not actively supported Common Core.

“Have organizations that I have been a part of supported Common Core? Of course. But that’s not my position. Sometimes it’s not just students who need to do their homework,” DeVos wrote.