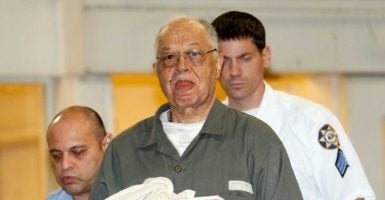 A popular book chronicling the story of abortionist Kermit Gosnell, who was convicted for murdering several infants, was left off The New York Times best-seller list.

Since its release on Jan. 24, “Gosnell: The Untold Story of America’s Most Prolific Serial Killer” quickly reached Amazon’s best-seller list, but was left off The New York Times’ hardcover nonfiction best-seller list.

It should have been the “fourth best-selling nonfiction title,” according to a press release by Regnery Publishing, the book’s publisher. “Gosnell” authors Ann McElhinney and Phelim McAleer covered the detailed story of the prolific abortion doctor and convicted murderer. The book includes an exposé of Gosnell’s practices, including a description of “his collection of severed baby feet and heads in his basement,” according to the Conservative Book Club.

According to Publishers Weekly, McElhinney and McAleer’s book was the ninth best-selling on the hardcover nonfiction best-seller list last week, and currently sits at No. 22 on the list.

When released, the book quickly sold out at both Amazon and Barnes & Noble and reached the top spot on Amazon’s “Hot New Release” list on the first day of its release.

“This book rose to No. 4 on Amazon without any coverage from the mainstream media,” McAleer told The Daily Signal in a phone interview. “The irony is that the book is about how the mainstream media refused to cover Gosnell’s murder trial. And even today, they’re still being shamefully dishonest.”

McElhinney and McAleer recently spoke at a Heritage Foundation event about their decision to write the book and produce a movie about Gosnell.

McAleer said that if the book had been published on the best-seller list, it would have been the first time the book was even mentioned by The New York Times.

The book, however, is listed at No. 13 on the Feb. 12 edition of The New York Times’ combined print and e-book nonfiction list, Danielle Rhoades Ha, New York Times vice president of communications, told The Daily Signal in an email last week.

According to Rhoades Ha, the list was manufactured based on “confidential” sales records provided by retailers.

“The Times’s best-seller lists are based on a detailed analysis of book sales from a wide range of retailers who provide us with specific and confidential context of their sales each week,” she said. “These standards are applied consistently, across the board in order to provide Times readers our best assessment of what books are the most broadly popular at that time.”

This is not the first time The New York Times has snubbed a conservative author, according to NewsBusters.

“The Intimidation Game: How the Left Is Silencing Free Speech,” written by a Wall Street Journal editorial board member Kimberley Strassel was left off the top 20 hardcover best-seller list when it was released in June 2016, despite selling more copies than some of the books on the list.

Similar instances have occurred to other conservative authors, including Dinesh D’Souza, Ted Cruz, and David Limbaugh, according to NewsBusters.