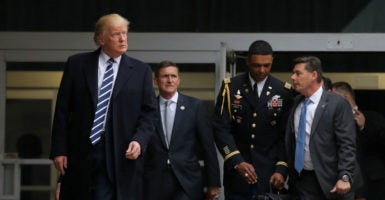 The new U.S. sanctions are targeted at 13 individuals and 12 entities for their support for Iran’s ballistic missile program or for the Islamic Revolutionary Guard Corps Quds Force. (Photo: Carlos Barria/Reuters/Newscom)

The Trump administration followed through on Friday with a new round of sanctions on Iran, two days after National Security Advisor Michael Flynn announced that it was “officially putting Iran on notice” for a missile test and its hostile regional policies.

The sanctions were targeted at 13 individuals and 12 entities for their support for Iran’s ballistic missile program or for the Islamic Revolutionary Guard Corps Quds Force, which has been designated under an executive order for providing material support to various terrorist groups, including Hezbollah and Hamas.

Those targeted under the sanctions cannot access the U.S. financial system or deal with U.S. companies. They also are subject to secondary sanctions, which would prohibit foreign companies and individuals from dealing with them or risk being blacklisted by the United States.

An anonymous senior U.S. official said Friday’s sanctions were an “initial step” in responding to Iran’s provocative behavior and would be followed by more steps if Iran continues on that path.

Iran’s Jan. 29 missile launch, which reportedly was tracked by at least one U.S. satellite, ended in an explosion after the missile travelled 630 miles, an apparent failure.

Some reports cited U.S. officials suggesting it was a Khoramshahr missile, which has yet to be displayed in public.

U.S. officials also charge that Iran has armed and assisted the Houthi rebel movement in Yemen, which reportedly launched a Jan. 30 attack by suicide bombers on a small boat that killed at least two sailors on a Saudi warship patrolling the Red Sea off Yemen’s coast.

Friday’s sanctions announcement is the first concrete response by the Trump administration, pushing back against Iran’s latest provocations.

The Obama administration preferred to ignore Iranian missile tests and its malign regional activities because it sought to preserve the flawed nuclear agreement, which it considered a positive legacy. This only emboldened Iran.

President Donald Trump warned in a tweet on Friday:

Iran is playing with fire – they don’t appreciate how “kind” President Obama was to them. Not me!

Mohammad Javad Zarif, Iran’s foreign minister, responded on twitter that Tehran is “unmoved by threats” and will not stop its missile program.

Iran and the United States appear to be on a collision course, with more sanctions and perhaps military clashes on the horizon.