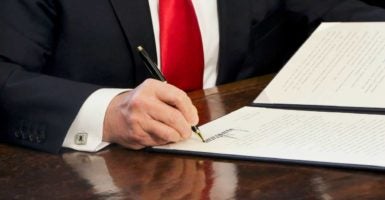 President Donald Trump has vowed to dismantle the Dodd-Frank Act, and on Friday he signed two executive orders to get that process moving. All Americans should be encouraged by this start, especially since the president is only two weeks into his administration.

One of Friday’s executive orders deals with a single Obama administration rule, but the other one sets the table for much broader reforms.

The former order lays out a path to rescind or revise what’s known as the fiduciary rule, a regulation designed to provide a single standard for anyone providing retirement investment advice.

The Dodd-Frank Act required the Securities and Exchange Commission to study the need for a new, uniform federal fiduciary standard for brokers and investment advisers. Despite this provision and a lack of evidence that there was any problem to fix, former President Barack Obama’s Department of Labor issued its own fiduciary rule.

In general, a fiduciary standard requires financial advisers to put their individual client’s interests above their own. As simple as that sounds, imposing a one-size-fits-all approach on investors is likely to lead to many unintended consequences, such as less investment advice for average Americans.

Trump’s executive order puts the Department of Labor’s fiduciary rule on a clear path to its demise, and makes it known that the administration wants to “empower Americans to make their own financial decisions.” This statement marks a sharp break from the Obama administration’s paternalistic view that Americans cannot sufficiently educate themselves on even basic investment issues.

The second order has much broader implications for a White House that expects “to be cutting a lot out of Dodd-Frank.”

This order makes it the official policy of the Trump administration “to regulate the United States financial system in a manner consistent with” seven core principles. These principles are as follows:

Many of these principles closely track the ideas in the Financial CHOICE Act, a bill that Financial Services Chairman Jeb Hensarling, R-Texas, proposed to replace large parts of Dodd-Frank.

The mere fact that the president stated these principles 15 days into his administration is a great sign for anyone who wants to get rid of bureaucratic red tape, government mandates, and taxpayer backing of losses.

Combining these principles with strong actions in new executive orders would be even better, but there’s no reason to suspect the Trump administration will remain idle.