University of Kansas Flies Defaced Flag in the Name of Art 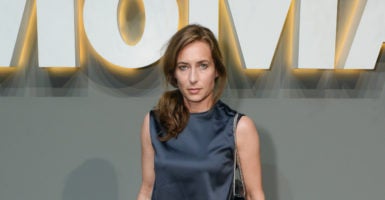 Josephine Meckseper, who is pictured at the Museum of Modern Art annual party on June 1, 2016, created a defaced American flag that was flown at the University of Kansas. (Photo: Scott Rudd/NameFace/Sipa USA/Newscom)

The University of Kansas flew a defaced American flag in the name of art, according to students on Tuesday.

Ian Ballinger, a student at the university, found the flag outside Spooner Hall on Tuesday. After talking to school administrators, he discovered the flag was first installed on July 4.

“Frankly, I think it is an incredibly disrespectful day to start flying it,” Ballinger told The Daily Caller News Foundation in a statement.

The flag shows a black contour of America divided in half to represent the polarizing political climate, according to the artist, Josephine Meckseper.

“I divided the shape of the country in two for the flag design to reflect a deeply polarized country in which a president has openly bragged about harassing women and is withdrawing from the Kyoto protocol and U.N. Human Rights Council,” Meckseper said, according to the Creative Time website. “The black and white sock on my flag takes on a new symbolic meaning in light of the recent imprisonment of immigrant children at the border.”

The flag is part of a series called Pledges of Allegiance, a campaign that claims to “inspire a sense of community among cultural institutions and begin articulating the urgent response our political moment demands,” according to the website. The national campaign commenced on Flag Day in 2017.

The university’s Spencer Museum of Art started flying various social justice flags since November, the defaced American flag being the last of the installment.

Garrett Miller, another student at the university, understood that flying the flag was protected under the Constitution, but found it “tasteless and disgusting,” especially after finding out about the message behind the flag.

Students, alumni, and community members are asking the administration to take down the flag for promoting bias and anti-American sentiments at the public university.

“Any desecrated flag being intentionally flown in such a manner should be investigated by state and federal authorities for misuse of taxpayer funds to promote anti-American sentiment,” graduate student and veteran Ian Appling told The Daily Caller News Foundation.

Student Victoria Snitsar was met with a few comments from students, calling her and agreeing she was a snowflake for disagreeing with the university for flying the flag.

Appling echoed Snitsar’s incident was not an isolated one. He said any person who held positive views of the American flag was ostracized by being labeled as alt-right, bigots, racists, and so on.

“You didn’t have to specifically be a ‘conservative’ in order to receive such abhorrent treatment. I received intense backlash for expressing constitutional views in a university forum from tenured professors, students, and faculty members,” said Appling.

The bias did not stop there. Miller recalled over the phone that a conservative group at the university tried to have a pro-life display at one point, but was denied by the university.

“I’m sorry that a Kansan would deface our symbol of strength, unity, and patriotism,” Watkins said, according to a July 10 press release. “I have no demands of the artist, university administration, or students, other than this—thank a soldier.”

The Daily Caller News Foundation reached out to the university for comment, but did not receive a response in time for publication.