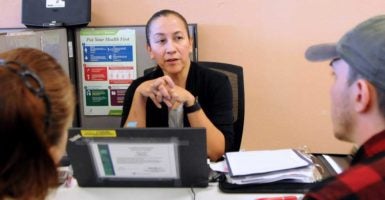 Even with many Obamacare enrollees being assisted by subsidies or tax credits, they may still find themselves paying more out of pocket for their health care, according to a study. (Photo: Paul Hennessy /Polaris/Newscom)

A new report shows that Obamacare enrollees could pay more money and end up with fewer options in 2017.

The study from Avalere Health, a health care consulting firm, showed rising premiums, deductibles, and out-of-pocket costs for many customers, a shrinking amount of insurance options in the exchange market, and a drastically lower number of Obamacare enrollees than projected.

Premiums for the silver-level plan, Obamacare’s most popular option, increased by an average of 12 percent in 2017. Specifically, the Avalere report showed that 71 percent of Obamacare enrollees covered under the silver plan have seen their average costs rise from $496 per month last year to $554 per month this year. The average cost for the first and second cheapest silver-level plans have also gone up by 25 percent.

Even for Obamacare’s bronze-level plan—the cheapest, lowest quality option—the monthly, average premiums rose from $408 in 2016 to $475 this year.

“Part of the reason why these premiums are rising is because there are fewer people enrolled than I expected, and the people who are enrolled are sicker than expected,” said Chris Sloan, a senior manager at Avalere, in a phone interview with The Daily Signal.

However, according to Sloan, with government subsidies and tax credits, lower-income earners enrolled in Obamacare may not be affected by the rising costs of these cheaper plans.

“While many consumers will experience significant premium increases this year, most will receive subsidies to help offset the costs of the increases and make premiums more affordable,” Sloan said in a statement.

Obamacare premiums are going up, but due to government financial assistance, real costs for many enrollees are remaining relatively the same. These costs will fall on taxpayers, according to a health care expert.

“If subsidies are going up through premium tax credits and cautionary reduction subsidies, the federal taxpayer ends up paying for that increase, so the burden of that is on all us federal taxpayers,” said Alyene Senger, a health care policy analyst at The Heritage Foundation.

Senger added, “When supporters of the [Affordable Care Act] say, ‘Well, these figures don’t really matter, because we’re subsidizing [Obamacare enrollees] so they aren’t feeling the brunt of their premium increases because the federal taxpayer is picking up the tab,’ that doesn’t apply to all the people who are purchasing in the individual market that get no subsidy.”

However, even with many Obamacare enrollees being assisted by subsidies or tax credits, they may still find themselves paying more out of pocket for their health care, as deductibles for services and drugs jumped by about 20 percent for silver-level plans in 2017. The number of silver-level plans charging coinsurance—an out-of-pocket payment charged after a consumer’s deductible is paid—for specialty drugs went up by 10 percent.

Issuer participation is also a problem highlighted by the Avalere report, as approximately 1 in 3 regions in America now only have one health insurance issuer. In 2016, just 4 percent of the country was limited to one issuer in their region. After several national and regional insurers exited the exchange markets, 36 percent of the country is now stuck with one issuer in their region.

“What this means is that people who have purchased insurance for 2017 have a lot less choice, so if there’s only one issuer offering health plans in your area and their network doesn’t include your doctor, then that’s it, you don’t really have another option,” Sloan told The Daily Signal.