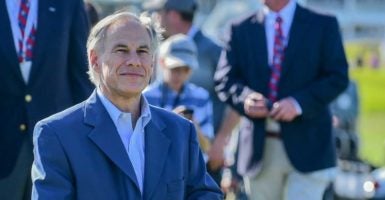 Texas Gov. Greg Abbott cut off state funds to a county that provides sanctuary to illegal immigrants Wednesday, following through on an earlier pledge to punish such sanctuary cities and localities.

Travis County will no longer have access to $1.8 million in state criminal justice grants, Abbott announced in a letter to county officials, because of a new sanctuary policy implemented by the county sheriff. The policy at issue instructs staff at the sheriff’s department to release illegal immigrants booked in the local jail rather than assist the federal government in deporting them, unless they have been charged with murder, aggravated sexual assault, or human smuggling.

He said “banning” such areas of sanctuary in Texas is a top priority in an address to the state Tuesday. “Elected officials don’t get to pick and choose which laws they obey,” he said. “To protect Texans from deadly danger, we must insist that laws be followed.”

Supporters of sanctuary cities argue local jails shouldn’t be forced to extend detention of illegal immigrants picked up for crimes, because deportation is the job of the federal government.

Travis County Sheriff Sally Hernandez told a local outlet the sanctuary policy builds trust between police and the community, saying the threat of deportation might prevent people from reporting crimes for fear of the immigration consequences.