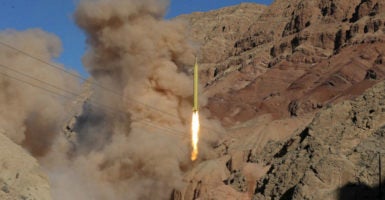 A ballistic missile is launched and tested in an undisclosed location, Iran, Mar. 9, 2016. (Photo: Tima/Reuters/Newscom)

The more things change, the more they stay the same.

Iran’s actions are destabilizing to the region and underscore the United States’ need for the development of a comprehensive ballistic missile defense system.

Resolution 2231 “calls upon Iran not to undertake any activity related to ballistic missiles designed to be capable of delivering nuclear weapons, including launches using such ballistic missile technology.”

Iran was previously banned from developing ballistic missiles, but the Obama administration watered down the restrictive language during the negotiations with Iran over its nuclear program.

The nuclear deal, adopted in 2015, effectively rewarded Iran’s noncompliance with the International Atomic Energy Agency inspections and regional support for terrorism by giving it billions of dollars. The agreement failed to dismantle key elements of Iran’s nuclear program, leaving the decision to “go nuclear” firmly in the hands of the Iranians.

Iran has already been caught trying to clandestinely procure illicit nuclear and ballistic missile technologies, including components for biological and chemical weapons.

Trump has multiple tools at his disposal to weaken Iran and strengthen the U.S. position in the region. Most importantly, the administration should ensure that Iran will never obtain a nuclear weapon. It should strictly enforce the Joint Comprehensive Plan of Action and not continue to give Iran a free pass on its illicit activities.

A nuclear-armed Iran would be a game-changer and could cause cascading nuclear proliferation in a region already fraught with conflict and historical animosities. Strengthening the U.S. military, maintaining a strong regional presence, and mending relationships with regional allies would complicate Iran’s calculations regarding its decision to go nuclear.

A proper resourcing, emphasis on future technologies (particularly space-based), and a sound re-evaluation of assumptions that guide the current U.S. ballistic missile defense posture is in order.

The Trump administration has precious little time to fill the void left by President Barack Obama’s ill-conceived policies in the region. Swift and strategic action is required.