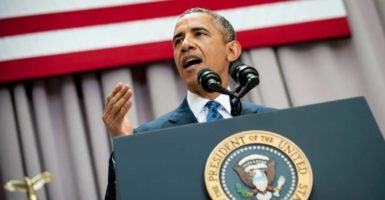 One year after the negotiation of the nuclear agreement, Iran continues to pursue the hostile policies that make it dangerous to the United States and its allies.

Yet, President Barack Obama’s administration, hoping to lock in a nuclear deal that it sees as a positive legacy, is bending over backward to accommodate Tehran’s demands for greater economic rewards through sanctions relief over and above that required by the nuclear agreement.

Iran’s long record of nuclear cheating, current hostile behavior, and continued truculence make it increasingly clear that this administration’s legacy is likely to be a nuclear-armed Iran.

Last week, Germany’s domestic intelligence agency revealed that Iran has continued its clandestine efforts to procure illicit nuclear and ballistic missile technology and equipment from German companies “at what is, even by international standards, a quantitatively high level.”

To make matters worse, another German intelligence report indicated that the Iranians not only were continuing their efforts to acquire nuclear technology after the agreement was signed, but they also sought items that could be used to make illegal chemical and biological weapons.

The intelligence report from the state of Rhineland-Palatinate’s intelligence agency, the equivalent of an FBI field office, stated that Iran aggressively targeted German companies whose equipment could be used “for atomic, biological, and chemical weapons in a war.”

Two German intelligence officials subsequently confirmed to The Wall Street Journal that the Iranian procurement efforts continued this year and involved front companies operating from the United Arab Emirates, Turkey, and China, and to a lesser extent from Turkmenistan and Iraq.

This uptick in activity in China corresponds to a reduced emphasis on enforcement in the United States over alleged illegal Iranian procurement activities. During the last two years, the Obama administration has inhibited federal investigations and prosecutions of alleged Iranian illegal procurement efforts. The stated reason has been concern over the impact on the Iran nuclear deal.

In other words, the administration has prioritized preserving the nuclear deal over enforcing it. Iran, therefore, sees little risk in continued nuclear smuggling efforts and may be emboldened in other areas as well.

David Albright and Andrea Stricker of the Institute for Science and International Security also reported on July 7 that Iran tried to buy tons of carbon fiber, which is a controlled material needed for building advanced centrifuges for uranium enrichment, from an undisclosed country. They warned that this attempt, which came after the implementation of the nuclear agreement in January, raises concerns over whether Iran intends to abide by its nuclear commitments.

This disturbing news comes after the revelation that International Atomic Energy Agency inspectors found man-made uranium particles at the Parchin military complex, where Iran is suspected to have conducted nuclear weapons-related tests.

Meanwhile, Iran’s theocratic dictatorship has made it clear that the nuclear agreement will not alter its hostility to the United States or ease its malign policies toward its neighbors.

IRGC vessels launched rockets within 1,500 yards of the carrier Harry S. Truman near the Strait of Hormuz in late December, flew drones over U.S. warships, and detained and humiliated 10 American sailors in January.

On Monday, IRGC gunboats swarmed dangerously close to a U.S. Navy ship in the Strait of Hormuz that was carrying Gen. Joseph Votel, the commander of the U.S. Central Command. The Wall Street Journal reported that there were about 300 such naval incidents orchestrated by Iran against U.S. ships in 2015.

The IRGC launched a series of ballistic missiles in March, including two that were inscribed with the message “Israel must be wiped out” in Hebrew.

On July 1, the IRGC’s deputy commander stated that more than 100,000 missiles were ready to be launched at Israel from Lebanon and that Israel’s annihilation was imminent.

Tehran continues to issue threats against other U.S. allies, including Bahrain and Saudi Arabia. The regime continues to orchestrate chants of “Death to America!”

But these threats are continuously ignored by the Obama administration, which prefers to focus on promises of Iranian compliance with its nuclear commitments, which Tehran repeatedly has broken in the past.

Proof that Iran’s regime has not changed is the fact that it is still in the hostage-taking business. When the nuclear agreement came into effect on “implementation day,” Jan. 16, Iran recovered seven Iranians charged with sanctions violations in return for four innocent American captives held as bargaining chips. A fifth American, a student jailed for unknown reasons, also was released.

The hostage deal, which the administration maintains was negotiated separately from the nuclear deal, involved the release of Iranians justifiably imprisoned or charged with sanctions violations. This swap of prisoners for hostages rewarded Iran’s dictatorship for hostage-taking and is sure to encourage it to seize more captives.

In addition to furnishing leverage over the U.S. and other countries, the Tehran regime has arrested Iranians with dual citizenship and held them hostage on flimsy charges in order to intimidate political opponents and stifle reform efforts. Iran’s supreme leader, Ayatollah Khamenei, has constantly warned against the threat of political and cultural “infiltration” by the U.S. and its allies after the nuclear deal, spurring a wave of arrests and persecution of dual nationals.

A Great Deal for Iran

The administration’s diplomatic engagement without preconditions has enabled Iran’s dictatorship to have its cake and eat it too. Iran remains the world’s foremost state sponsor of terrorism, but has been rewarded on the nuclear front for what could be temporary and easily reversible concessions.

In addition to allowing Tehran to recover roughly $100 billion in sanctions relief, the Obama White House has encouraged European allies to increase trade and investment in Iran, cleared the path for the sale of Boeing aircraft to Iran—which could be used for military purposes—and has pressed the Financial Action Task Force, an international body that enforces money laundering standards, to ease restrictions on Iran.

The administration has gone so far as to buy 32 tons of heavy water from Iran for $8.6 million, thereby subsidizing Iran’s nuclear program. The material was meant to be used in the Arak heavy water reactor for the production of plutonium, but that reactor is being redesigned.

Under the terms of the nuclear agreement, Iran is required to reduce its supply of heavy water, but Washington is not required to purchase it. By buying the heavy water, the United States risks legitimizing Iran as a nuclear supplier and rewarding it for past violations of its nuclear obligations. Iran instead could blend the heavy water down to regular water.

But the administration, now held hostage by its desperate need to salvage a “legacy,” has downplayed the risks involved in its heavy water subsidy, just as it has downplayed all the risks inherent in the nuclear deal from the very beginning.

The White House has succumbed to a form of diplomatic “Stockholm syndrome” in which the preservation of the nuclear deal with Iran is its top priority.

Even worse, U.S. officials have said that the administration is seeking to encourage Western trade with Iran to make it more difficult for future presidents to walk away from the agreement.

U.S. allies are increasingly skeptical of Washington’s ability and willingness to strictly enforce the agreement. As a British diplomat reportedly complained, “The United States is no longer feared by its enemies or respected by its friends.”

Hope for Change: An Unrealistic Strategy for Iran

The Iran nuclear agreement, which frontloads sanctions relief for Iran and removes key restrictions on Iran’s nuclear program after 10 to 15 years, makes no sense unless the Obama administration believes that Iran’s tyrannical regime will be transformed in the immediate future.

Unfortunately, Obama sees himself as a transformative figure and presumes that his engagement with Iran and the nuclear agreement are transformative, rather than purely transactional, operations.

The genuine moderates that the administration should have engaged were purged by the regime in 2009 after massive public protests against Iran’s fraudulent elections. The Obama administration watched from the sidelines during that crisis, intent on unconditionally engaging the hard-liners who brutally suppressed the opposition green movement. As a result, there is a lot less hope for change in Iran today.

It will be up to the next administration to clean up the disastrous Iranian nuclear legacy that it inherits from this one.

The Iran Nuclear Agreement: Yes, There Is a Better Alternative