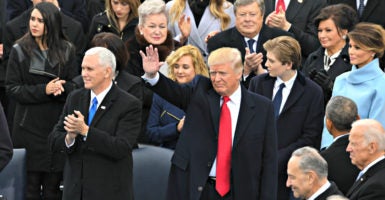 Senate Democrats who last year called for an up-or-down vote on Supreme Court nominees changed their tune as President Donald Trump prepared to announce his choice for the high court Tuesday night.

“This is a stolen seat,” Sen. Jeff Merkley, D-Ore., said Monday of the vacancy Trump was about to fill. “This is the first time a Senate majority has stolen a seat. We will use every lever in our power to stop this.”

Democrats unsuccessfully pressured Republicans to confirm the election-year nomination of Garland. They said the Senate had a “constitutional obligation” to approve Obama’s nominee to succeed Scalia, a stalwart conservative.

“My constitutional obligation is to review that nominee, to ask questions about that nominee, and then to vote on it,” Sen. Joe Donnelly, D-Ind., said in February. “So you know I plan to do my job.”

Senate Minority Leader Chuck Schumer, D-N.Y., and other Democrats such as Merkley, however, appeared to change direction after Trump won the White House.

During an interview with MSNBC’s Rachel Maddow in early January, Schumer said his party would oppose anyone who wasn’t “really good.”

“We are not going to settle on a Supreme Court nominee,” Schumer said. “If they don’t appoint someone who is really good, we are going to oppose them tooth and nail.”

Such statements about blocking the confirmation process through a filibuster are in sharp contrast with what Democrat leaders said in the past about the Senate’s role in confirming a president’s Supreme Court choice.

“Democrats may try and run, but they can’t hide from their records—all we have to do is roll the tape,” Brian Rogers, the group’s executive director and former communications director for Sen. John McCain, R-Ariz., said in a release.

“Doing your job is holding a hearing, asking tough questions of the judge, and then voting yes or no,” Schumer said in April.

Hans von Spakovsky, a senior legal fellow at The Heritage Foundation, said he is not surprised by what he called Schumer’s double standard. In an email to The Daily Signal, von Spakovsky said:

The double standard shown by Sen. Schumer and his Democratic cohorts shows that they have no real principles whatsoever when it comes to the Supreme Court and the respectful treatment of judicial nominees—their only interest is achieving their political goals at all costs even if it means destroying the Constitution, the rule of law, and the fabric of the Senate.

Sen. Elizabeth Warren, D-Mass., said in March of the Garland nomination that the Senate should respect the “constitutional duty” of the president by voting on Obama’s choice.

“The president has done his constitutional duty, he has sent us a nominee, and now it is our job in the United States Senate to hold hearings, to examine his credentials, and then to have a vote on him,” Warren said. “That’s what the Constitution calls for.”

In May, Sen. Claire McCaskill, D-Mo., also voiced support for a vote without obstruction by Republicans.