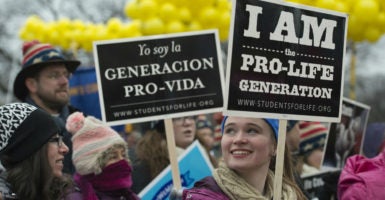 Every year since 1973, thousands of Americans have converged on Washington, D.C., to participate in the March for Life. (Photo: Molly Riley/UPI/Newscom)

Today, tens of thousands of Americans are expected to participate in the 44th March for Life, commemorating the Supreme Court’s 1973 Roe v. Wade decision, which invented a right to abortion on demand in the United States.

While marchers make the now-familiar trek from the Washington Monument to the Supreme Court this morning, the pro-life movement will have much to celebrate.

Just this week, President Donald Trump signed an executive order reinstating and expanding what is known as the “Mexico City policy,” prohibiting federal taxpayer dollars from flowing to international organizations that preform or promote abortion.

Meanwhile, the House of Representatives on Tuesday passed the No Taxpayer Funding for Abortion and Abortion Insurance Full Disclosure Act of 2017, which would ensure that no federal dollars are used to pay for elective abortions or support any health plans that cover abortion on demand—including many Obamacare plans.

Trump has promised to stop taxpayer funding of abortion, in addition to limiting gruesome and painful late-term abortions, ending federal taxpayer support of Planned Parenthood, and nominating pro-life justices to the Supreme Court.

To champion these promises of the new administration, Vice President Mike Pence will speak at the March today—the first time a sitting vice president has spoken to the ever-growing and fervent group.

The march’s theme this year is “The Power of One.” It is a poignant reminder that it often only takes one person—one woman changing her mind, one doctor working to reverse early abortions, one counselor willing to listen, one couple bravely facing their baby’s prenatal diagnosis, one birth mother making a difficult yet beautiful decision—to save a life.

It is the personal, local determination to live out the truth that every person—no matter how tiny, dependent, disabled, or seemingly inconvenient—has inherent dignity and worth that fuels the success of the pro-life movement.

Every day in communities across the country, over 2,000 pregnancy centers provide counseling, medical services, and continued to support to women facing unplanned pregnancies, empowering them with life-affirming options.

Over the past five years alone, state policymakers have passed more than 300 commonsense policies protecting women from a dangerous abortion industry and restoring respect for the dignity of both mother and child in law.

Because of that persistent, tireless witness for life, 74 percent of Americans now say they would support significant restrictions on abortion, limiting it to at least the first three months of pregnancy.

Just a few weeks ago, the pro-abortion Guttmacher Institute announced that the nation’s abortion rate continues to plummet to its lowest point since 1973.

While there is certainly much to cheer, the march is also a time for somber remembrance.

It is a time to reflect on the enormous cost of abortion by remembering the almost 60 million children who have lost their lives since that cold January day in 1973, and the countless women who still suffer from abortion’s physical and emotional tolls.

Despite the many advances made by the pro-life movement, challenges persist.

Today, over half a billion in taxpayer dollars still flow to affiliates of Planned Parenthood—the largest abortion provider in the country, which stands accused of selling the tiny organs and tissue of aborted children, defrauding government programs, and endangering women and girls.

Embarrassingly permissive laws on late-term abortion have left U.S. policy at odds with the majority of Americans, and an extreme outlier among developed nations. Additionally, Obamacare continues to threaten the conscience rights of pro-life Americans and entangle taxpayers in funding abortion coverage.

With a new administration and a new Congress promising to address many of these problems, Americans can march today with a renewed sense of hope that progress for life will continue.

One thing is for certain: The pro-life movement will face these challenges, as it has numerous others over the past 40 years, tirelessly speaking the truth about the worth and dignity of every mother and child and providing hope, resources, and healing for those caught in a culture that too often devalues life.