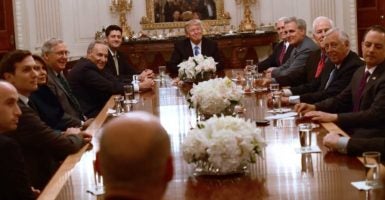 Judge Neil Gorsuch was confirmed by the Senate on July 20, 2006, to serve as the judge for the 10th U.S. Circuit Court of Appeals.

Judge Thomas Hardiman was confirmed by the Senate on March 15, 2007, to be a U.S. circuit judge.

Both received significant bipartisan support during their confirmations.

Gorsuch was confirmed by voice vote, in which senators’ yes and no votes aren’t recorded, signifying that any opposition from Democrats was not significant enough to require a regular vote, according to Elizabeth Slattery, a legal fellow at The Heritage Foundation.

Hardiman was confirmed with a vote of 95-0.

“If the nominee is not bipartisan and mainstream, we absolutely will keep the seat open,” Schumer said during an interview with CNN’s “State of the Union.”

However, should Trump decide to nominate Gorsuch or Hardiman, both nominees would have already received bipartisan support.

According to a report released by Brian Rogers, executive director of America Rising Squared, a conservative research organization, “31 currently-sitting senators were in office when Judge Gorsuch was confirmed by voice vote in 2006, including 11 Democrats and 20 Republicans.”

In regards to Hardiman, “37 currently sitting senators voted to confirm Judge Hardiman when he was approved 95-0 in 2007, including 18 Democrats, 18 Republicans, and one independent,” according to the America Rising Squared report.

Should Trump choose Gorsuch or Hardiman as his pick to fill the vacant Supreme Court seat for the late Justice Antonin Scalia, Slattery said that either would be a “fine successor.”

“Neil Gorsuch and Thomas Hardiman are both highly qualified and well-respected court of appeals judges,” Slattery said in an email to The Daily Signal. “They have demonstrated that they understand the proper, limited role of the judiciary and are committed to interpreting the Constitution and laws according to the original public meaning of the text. Either would be a fine successor to Antonin Scalia on the Supreme Court.”