Trump’s Choice for EPA Chief Wants to Partner With, Not Punish, States 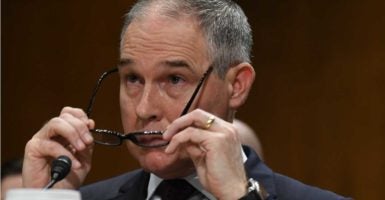 President-elect Donald Trump’s pick to run the Environmental Protection Agency explained how he would make cooperating with the states a priority of the department during a Wednesday hearing on Capitol Hill.

Scott Pruitt, the Oklahoma attorney general, stressed “cooperative federalism” would be his guiding philosophy in running the EPA, meaning he wants the often controversial agency to work with states.

“Cooperative federalism is at the heart of many of the environmental statutes that have been passed by this body,” Pruitt told the Senate Committee on Environment and Public Works. “The reason for that is that it’s the states, many times, that have the resources, the expertise, and understanding what the unique challenges are for the environment in improving our water and our air.”

“It was Republicans who created the EPA under an executive order in the 1970s,” @AGScottPruitt says.

As his state’s attorney general, Pruitt led more than a dozen lawsuits against the EPA—which he defended as not being opposed to environmental regulations, but opposing legal overreach by the agency.

“We need a partnership, a true partnership, between the EPA performing its role, along with the states in performing theirs,” Pruitt said. “If we had that partnership as opposed to punishment, as opposed to uncertainty and duress that we currently see in the marketplace, I think we’ll have better air, better water quality as a result.”

Democrats on the Senate committee criticized Pruitt for suing to block certain EPA regulations, such as the Clean Power Plan and the Waters of the United States rule.

Sen. Sheldon Whitehouse, D-R.I., said his state has “bad air days” when people are informed to stay inside because of out-of-state smokestacks that pollute the air.

“Because those smokestacks are out of state we need EPA to protect us and I see nothing in your record that would give a mom taking her child to the hospital for an asthma attack any comfort that you would take the slightest interest in her,” Whitehouse said. “Your passion for devolving power down to states doesn’t help us because our state regulators can’t do anything about any of those problems. They all come from out-of-state sources.”

Pruitt said he wanted the EPA to adhere to its statutory authority from Congress.

In response to a question from Sen. Ed Markey, D-Mass., Pruitt asserted, “I do not believe that climate change is a hoax.”

Pruitt, in his opening remarks, said the debate about the degree of human impact on climate change is open for dialogue.

“We should encourage open and civil discourse. One such issue where discourse is absent involves climate change,” Pruitt said.

Sen. Kirsten Gillibrand, D-N.Y., accused Pruitt of only being worried about financial costs of regulations.

“I need you to care about human health and really believe that the cost when people are dying is far higher than it is to the cost of that polluter to clean up the air,” Gillibrand said.

However, Sen. Joni Ernst, R-Iowa, talked about what a threat the EPA can be to American citizens.

“What I hear without fail at these town halls is that folks are frustrated with the EPA and the gotcha mentality that is stemmed from the agency,” Ernst said. “My constituents tell me that the EPA is out to get them rather than work with them. There is a huge lack of trust between my constituents and the EPA.”

Pruitt responded it does not have to be this way.