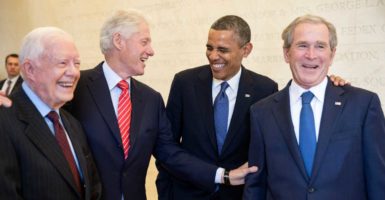 President Barack Obama says he appreciated George W. Bush’s silence during his eight years in office. Now, as the current president prepares for life outside the White House, his aides have given mixed messages about just how political Obama will be during the Trump administration.

Obama has said speaking out on policy won’t be his priority after leaving the White House on Friday.

“Now, that doesn’t mean that if a year from now or a year and a half from now or two years from now, there is an issue of such moment, such import, that isn’t just a debate about a particular tax bill or, you know, a particular policy, but goes to some foundational issues about our democracy that I might not weigh in,” Obama said in a December CNN interview with his former adviser, David Axelrod. “You know, I’m still a citizen and that carries with it duties and obligations.”

Upon leaving the White House, Obama will be the first president to remain in the District of Columbia since Woodrow Wilson in 1921. The first family is remaining in the District until their 15-year-old daughter, Sasha, graduates high school.

I’m still a citizen and that carries with it duties and obligations.” @POTUS says.

Obama will have a new office in the same building that houses the World Wildlife Federation. He has also already started building his post-presidency staff, the Chicago Tribune reported Monday. He hired a chief of staff, Anita Decker Breckenridge, an aide since Obama was an Illinois state legislator in 2003.

The Tribune also reported that Obama will speak up for Dreamers, the label given to children of illegal immigrants. In June 2012, Obama took executive action to carry out the Deferred Action for Childhood Arrivals program that protects illegal immigrants from deportation. Trump opposes the program.

Obama’s involvement in policy battles would be a significant departure from his predecessor. Upon leaving office in 2009, Bush retreated to Texas and out of the spotlight. Movers take boxes from a truck to 2446 Belmont Road, NW, in Washington, D.C., the home that President Barack Obama and his family will be living in after he departs the White House Friday. (Photo: Ron Sachs/CNP/Polaris/Newscom)

“He deeply appreciated how President George W. Bush, after leaving office, gave the new president some running room, gave him a little space, wasn’t backseat driving in public, offering up all kinds of critiques with every single decision that President Obama was making in the earliest days of his presidency,” Earnest told reporters during a White House briefing.

Bush has consistently steered clear of criticizing Obama or even making many policy pronouncements. Democrat predecessors such as Bill Clinton and Jimmy Carter have remained in the spotlight, choosing to speak out on various political issues of interest to them.

“He is already one of the wealthiest presidents in modern history and he will probably make millions more on corporate boards,” author and presidential historian Craig Shirley told The Daily Signal of Obama. “I wouldn’t be surprised if he became secretary-general of the United Nations.”

Shirley, a biographer of Ronald Reagan, said Obama will be similar to Clinton—young in retirement and unable to step out of the spotlight. He doesn’t anticipate Obama having a modest post-presidency like his immediate predecessor.

Reports over the last two years indicated Obama would focus on his presidential library to be built in Chicago, but also on helping black youth through a nonprofit incarnation of the White House initiative known as “My Brother’s Keeper.”

Obama has said he was committed to the goals of the “My Brother’s Keeper” program to boost opportunities for young men of color after leaving office. Shirley suggested this could be an “admirable” nonpolitical issue for Obama—one in which he could become an elder statesman in his post-presidency.

A more political effort would come from his work with the Democratic Legislative Campaign Committee, which is focused on doing away with gerrymandering. Obama is expected to work with former Attorney General Eric Holder on the initiative. Gerrymandering is the drawing of legislative and congressional districts to help one’s party.

Obama’s involvement is geared toward helping Democrats running for state legislatures win back state houses before the 2020 census and subsequent redistricting.

“The Democrats have lost about 1,000 elective legislative seats since Obama took office,” Shirley said. “For stopping gerrymandering, they’re not going to turn to Obama for guidance.”

During the CNN interview in December, Obama talked about shaping the next generation of leaders.

“With respect to my priorities when I leave, it is to build that next generation of leadership; organizers, journalists, politicians,” Obama said. “I see them in America, I see them around the world, 20-year-olds, 30-year-olds who are just full of talent, full of idealism.”

He continued that a short-term goal would be helping his beleaguered Democrats.

“I think what I can do is not do it myself, but say to those who are still in the game right now look, think about this, think about how you’re organizing that, you know, what are you doing to make sure that young talent is out there in the field being supported,” Obama said. “You know, how are you making sure that your message is reaching everybody and not just those who have already been converted. Identifying really talented staff and organizers who are already out there and encouraging them to get involved.”