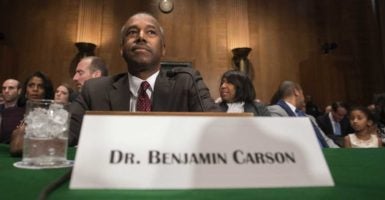 Retired neurosurgeon Ben Carson appeared before the U.S. Senate Committee on Banking, Housing, and Urban Affairs Thursday to share his vision for the Department of Housing and Urban Development if the Senate confirms him as its next secretary.

In early December, President-elect Donald Trump announced Carson, who was a rival contender for the White House, as his pick to lead HUD.

At the hearing, Republican Sen. Thom Tillis questioned Carson about his vision of best serving those who are on government programs.

“What is the best possible thing we can do for somebody who is on government assistance?” the North Carolina senator asked.

“Get them off of it,” Carson responded.

Carson said in a written statement that growing up in “inner city Detroit with a single mother who had a 3rd grade education” allowed him to understand housing insecurity.

Carson credited his mother for teaching him the importance of personal responsibility, and said that if confirmed as the next secretary of housing and urban development, he would do more than just advance its programs and funding.

Carson said that as part of his effort to enable and serve the beneficiaries of HUD programs, he plans to potentially put medical clinics in neighborhoods so that people don’t “rely on the emergency room where it costs five times more and where you don’t get kind of follow up that would prevent you from having stage five renal disease.”

4. Will work to benefit ‘all Americans.’

Sen. Elizabeth Warren, D-Mass., asked Carson about his intentions to ensure that none of the money funneled through HUD would specifically benefit Trump’s real estate ties.

“My concern is whether or not, among the billions of dollars that you’ll be responsible for handing out in grants and loans, can you assure us that not one dollar will go to benefit either the president-elect or his family?” Warren asked.

Carson responded by saying that his work would be beneficial to all Americans, not just the select few.

“It will not be my intention to do anything to benefit any American, particularly,” Carson said. “It’s for all Americans, everything that we do.”