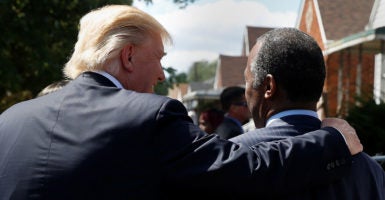 President-elect Donald Trump taps one of his primary opponents to head the Department of Housing and Urban Development. (Photo: Carlo Allegri/Reuters/Newscom)

“Ben Carson has a brilliant mind and is passionate about strengthening communities and families within those communities,” Trump said in a formal statement. “We have talked at length about my urban renewal agenda and our message of economic revival, very much including our inner cities.”

Carson, who previously voiced doubts about taking on a Cabinet-level position, said he is “honored” to serve as head of the housing agency, where he will be tasked with helping more low-income families secure access to safe and affordable homes.

“I am honored to accept the opportunity to serve our country in the Trump administration,” Carson, 65, said, adding:

I feel that I can make a significant contribution, particularly by strengthening communities that are most in need. We have much work to do in enhancing every aspect of our nation and ensuring that our nation’s housing needs are met.

Carson, the son of a single mother, grew up poor and the family had to utilize public assistance for a period of time.

The Department of Housing and Urban Development’s programs include the housing choice voucher program, mortgage loans, and oversight of the Fair Housing Act, which prevents discrimination.

Here are five things to know about Carson, who will face Senate confirmation:

1. He is a notable critic of “government dependency.”

Since early 2015, Carson made reducing what he calls “government dependency” a hallmark of his campaign. He often spoke of federal public assistance programs trapping low-income families in a cycle of poverty, and instead prefers local and private-sector approaches.

“I’m interested in getting rid of dependency, and I want us to find a way to allow people to excel in our society, and as more and more people hear that message, they will recognize who is truly on their side and who is trying to keep them suppressed and cultivate their votes,” Carson said in a 2015 speech at the Conservative Political Action Conference outside Washington, adding:

That’s not compassion, that’s the opposite of compassion. It’s making people dependent. What real compassion is, is using our intellect to find ways to allow those people to climb out of dependency and realize the American dream.

Carson is the first African-American picked for a Cabinet spot in the Trump administration. (Photo: Steve Marcus/Reuters//Newscom)

Although some observers criticize Carson for his lack of government experience, Carson does have experience utilizing public assistance. In his autobiography, “Gifted Hands,” Carson wrote about being raised by a single mom in inner-city Detroit and often feeling ashamed for relying on government assistance such as food stamps.

“I knew [my mother] was trying to keep us off public assistance,” he wrote, adding:

By the time I went into ninth grade, Mother had made such strides that she received nothing except food stamps. She couldn’t have provided for us and kept up the house without that subsidy.

3. He is a world-renowned brain surgeon who often touted his accomplishments on the campaign trail.

Carson, who received a scholarship to Yale, was named director of pediatric neurosurgery at John Hopkins Hospital at age 33.

Now retired, Carson often joked during the Republican primaries that Washington needed more outsiders like him.

“[I’m] the only one to take out half of a brain, although you would think if you go to Washington, that someone had beat me to it,” he said in an August debate.

4. His relationship with Trump was at times rocky, but they made amends.

Unlike some of the other 2016 Republican presidential candidates, Carson and Trump resolved their differences early on. After an underwhelming performance on Super Tuesday, Carson dropped out and, shortly thereafter, endorsed Trump.

The two previously feuded in public, with Trump attacking Carson for comments on pyramids and his biography’s description of his violent tendencies as a youth.

With Ben Carson wanting to hit his mother on head with a hammer, stab a friend and Pyramids built for grain storage – don't people get it?

5. He has criticized the performance of the Department of Housing and Urban Development under the Obama administration, suggesting he’d implement major reforms.

In 2015, Carson compared Obama administration housing rules designed to “affirmatively promote” fair housing to “the failure of school busing” decades ago, when low-income, inner-city students were bused to schools in more affluent neighborhoods and students in those neighborhoods were bused to poor schools.

“The rationale was that if white parents had to send their children to black schools, they would help to ensure that those schools were better equipped,” Carson wrote.

In criticizing the Obama administration’s take on the Fair Housing Act, Carson suggested the Department of Housing and Urban Development was employing the same “failed” thinking. In The Washington Times, he wrote:

The new rule would not only condition the grant of HUD funds to municipalities on building affordable housing as is the case today, but would require that such affordable housing be built primarily in wealthier neighborhoods with few current minority residents and that the new housing be aggressively marketed to minorities. In practice, the rule would fundamentally change the nature of some communities from primarily single family to largely apartment-based areas by encouraging municipalities to strike down housing ordinances that have no overtly (or even intended) discriminatory purpose—including race-neutral zoning restrictions on lot sizes and limits on multi-unit dwellings, all in the name of promoting diversity.

Relying on information from The New York Times, an earlier version of this story incorrectly stated that Carson lived in government housing. The New York Times has since corrected its story and The Daily Signal has updated its own to reflect the correction.