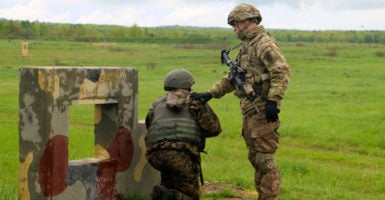 A U.S. Army soldier with a Ukrainian soldier at a training base in western Ukraine. (Photo: Nolan Peterson/The Daily Signal)

KYIV, Ukraine—Kalashnikov assault rifles are among the most iconic symbols of the Soviet military.

Weapons such as the AK-47, the AKM, the AK-74, and the AK-103 are ubiquitous reminders of the Red Army’s legacy among the modern militaries of former Warsaw Pact countries and Soviet client states.

Also, the contemporary, worldwide use of Kalashnikovs by terrorists and insurgent groups offers grim evidence of the widespread proliferation of Soviet weapons during and after the Cold War.

On Jan. 3, as part of a long-term plan to adopt NATO military standards, Ukraine took a step toward ditching this Soviet military carryover.

Ukroboronprom, Ukraine’s nationalized defense industry conglomerate, announced a partnership agreement between the Ukrainian defense manufacturer Ukroboronservis and the U.S. company Aeroscraft to produce in Ukraine a variant of the U.S. M16 assault rifle. A Ukrainian soldier cleans a Soviet-era Kalashnikov at a position on the front lines in eastern Ukraine. (Photos: Nolan Peterson/The Daily Signal)

“The M16 project was conceived some time ago, as the Ukrainian armed forces, border guards, and National Guard will with time switch to NATO standards,” Aeroscraft founder and CEO Igor Pasternak said during a Jan. 3 press conference in Kyiv.

The M16 variant Ukraine will produce is called the WAC47.

The catch: The WAC47 uses Soviet ammunition, not the standard NATO 5.56×45 mm cartridge.

However, the Ukrainian production of Soviet-caliber M16s plan is a first step toward adopting NATO military standards—a goal Ukrainian President Petro Poroshenko directed the military to achieve by 2020.

The WAC47 can be modified to use NATO ammunition, and “switching calibers” was one of the reasons Ukroboronprom listed to justify its decision to build its M16 variant.

“For our country and the Ukrainian army, M16 production in Ukraine is a real step towards Euro-Atlantic structures,” Ukroboronprom said in a statement published to its website.

By the time Ukraine fully adopts NATO military standards, its military will have a stockpile of M16s that can be modified to use NATO ammunition.

According to Ukroboronprom, interoperability problems Ukrainian troops have faced while on joint operations with NATO troops spurred the decision to produce the American assault rifle. U.S. Army soldiers use a smaller, lighter variant of the M16, called the M4, in Afghanistan.

“Ukrainian soldiers are already participating in joint maneuvers with NATO,” Ukroboronprom said on its website. “And in each case, one of the problems is logistics.”

Ukrainian troops deployed to support NATO’s mission in Afghanistan, for example, had to borrow German assault rifles from Lithuanian troops due to ammunition incompatibility issues.

There is no standard assault rifle among NATO countries, only an agreement to use the same caliber small arms ammunition. NATO Standardization Agreement No. 4172 sets the standard small arms caliber at 5.56×45 mm.

In theory, troops from NATO countries could swap ammunition in combat, even if they use different weapons.

The M16 became the standard infantry weapon for the U.S. military in 1967. U.S. versions of the weapon use the standard NATO cartridge.

However, the WAC47 (the M16 version to be produced by Ukraine) is designed for 7.62×39 mm ammunition used by Soviet weapons such as the AK-47 and the AKM assault rifles.

Ukraine plans to adopt NATO military standards by 2020. Consequently, the Ukrainian weapons will have to be retroactively modified to use NATO ammunition.

According to weapons experts consulted by The Daily Signal, the WAC47 can be modified to take the NATO 5.56×45 mm cartridge, but it might be cost prohibitive.

“Rechambering a rifle for a cartridge different than it was originally designed for can be done in some circumstances,” Dakota Wood, senior research fellow for defense programs at The Heritage Foundation, told The Daily Signal.

“A lot of expense that simply implies it would be cheaper to buy new rifles designed for common NATO ammo,” Wood said.

In order to modify Ukrainian M16s to use NATO ammunition, the bolt and barrel will have to be replaced, Brian Summers, a U.S. Army veteran and weapons expert, told The Daily Signal.

The M16 rifle has two main components—an upper and a lower receiver. According to Summers, for a Soviet-caliber M16 to use NATO ammunition, only the upper receiver has to be modified by replacing the bolt and barrel. Kalashnikovs lined up on the firing range at the U.S. Army’s training mission in western Ukraine.

The M16 weapons system is “one of the most versatile weapon platforms in configuration and caliber,” Summers said. “Your troops essentially can train on one platform and when switching over to a new caliber do not need to be retrained in a new weapons system … Core of the platform, lower receiver, does not change and any optics can be moved.”

In the 1990s, Colt Defense LLC, the original M16 producer, produced a special civilian version of the military assault rifle designed to use Soviet 7.62×39 mm ammunition.

“I own this variant and if I want to fire 5.56 mm [NATO ammunition], I simply switch the upper receiver with 5.56 mm bolt and mags,” Summers said. “Two minutes to change.”

The Ukrainian M16 deal is not the first time a foreign weapon modified to use Soviet ammunition has been mass produced in Ukraine.

Israeli Tavors use standard NATO 5.56×45 mm ammunition. The Ukrainian variant, however, uses Soviet 5.45×39 mm ammunition, but can be modified to use NATO cartridges.

The Ukrainian military is embroiled in a nearly three-year-old proxy war against pro-Russian separatists and Russian regulars in the Donbas, Ukraine’s embattled southeastern territory on the border with Russia.

Since the war began in early 2014, Ukraine has embarked on a crash course to rebuild, resupply, and modernize its military.

Since then, the Ukrainian military has relied on Soviet-era stockpiles to supply its troops in combat. Ukrainian troops use surplus Soviet weapons on the front lines in eastern Ukraine.

“The ammunition reserves inherited by our country from the Soviet Army … are not unlimited, while their significant part has been thoughtlessly recycled or sold at a time when no one was thinking that we would be engaged in a war,” Oleksandr Turchynov, secretary of the National Security and Defense Council of Ukraine, said, according to Ukrainian news reports.

“This is a crucial large-scale task, and we have no other option but to implement it as soon as possible, for our country’s security directly depends on it,” Turchynov said.

According to arms experts, Ukraine currently has about 1 million AK-74 assault rifles and RPK-74 light machine guns in service. Both weapons use Soviet 5.45×39 mm ammunition.

The document calls for a total revamp of Ukraine’s military doctrine, training, and operations to ultimately achieve the “full membership in NATO.”

“We have finally abandoned the system of the Soviet army and started to build truly efficient armed forces,” Poroshenko said. “It is very important for me, because it is evidence that Ukraine and NATO speak the same language and understand each other well.” The Strategic Defense Bulletin directs the Ukrainian military to adopt NATO standards by 2020. It also singles out Russia as the No. 1 national security threat.

Ukrainian M16 production is a step—albeit a largely symbolic one—toward divorcing Ukraine from its Soviet military past by ditching Soviet weapons systems, thereby inching the country toward NATO interoperability.

“Every country that has teared itself away from Russia’s orbit, went or is going through this difficult stage, taking many years and demanding great effort,” Ukroboronprom, the Ukrainian defense industry conglomerate, said in a statement published to its website.

Ukraine will produce M16s for use by its armed forces, as well as for export. The deal, therefore, is a piece of a larger plan to reform and expand Ukraine’s defense industry.

“Weapon manufacture in accordance with NATO standards is an important part of the development and reform of the Ukrainian defense industry,” said Serhiy Mykytyuk, head of Ukroboronservis, according to a statement posted to the Ukroboronprom website. A U.S. Army soldier with an M16 variant called the M4 in Afghanistan.

Aeroscraft, the American firm partnering with Ukroboronservis to produce M16s, is a California-based aviation company specializing in lighter-than-air aircraft—including airships intended for U.S. military use.

Pasternak, Aeroscraft’s founder and CEO, was born in Soviet Kazakhstan and founded his first company, Aeros Ltd., in Ukraine. He immigrated to the U.S. in 1994, according to a biography published on Aeroscraft’s website.

“Ukraine is rapidly increasing its military capacities,” Poroshenko wrote in the introduction to the 2016-2017 Ukroboronprom product catalogue. “To become among the world’s top-five arms exporters is our strategic objective.”

In 2014, Ukraine was among the world’s top 10 arms exporting nations, according to the Stockholm International Peace Research Institute.