Sessions Is a Highly Qualified Pick for Attorney General 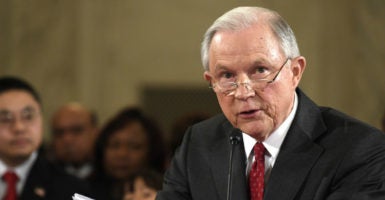 Timothy Head is the executive director of the Faith & Freedom Coalition.

Thomas Jefferson, in his first inaugural address as president in 1801, deemed “equal and exact justice to all men, of whatever state or persuasion, religious or political” one of the essential principles of our government. President-elect Donald Trump has demonstrated his intent to uphold this principle by nominating Sen. Jeff Sessions, R-Ala., to serve as attorney general.

In a nation of over 300 million people, there is no other individual more qualified or capable of upholding Jefferson’s vision of the federal justice system than Sessions.

As a four-term member of the Senate, Sessions has a distinguished record on the Judiciary Committee and has extensive experience within the federal judiciary as assistant U.S. attorney and U.S. attorney for the Southern District of Alabama. He also has experience at the state level as former attorney general of Alabama.

As a prosecutor and Alabama attorney general, he aggressively pursued and obtained criminal convictions for violent felonies and drug crimes, effectively pursued criminal charges against members of the Ku Klux Klan, and worked to desegregate Alabama schools.

Jeff knows the workings of the Justice Department inside and out. He is thoroughly familiar with the legal issues the department will face. He understands the mission of the department and will carry out his duties in a professional, thoughtful, and balanced manner.

The first order of business for Sessions as attorney general will be to restore the relationship between the Justice Department and federal, state, and local law enforcement agencies.

America’s law enforcement officials have been under attack from President Barack Obama’s Justice Department for the past eight years, but with Sessions leading the agency, rank-and-file officers who put themselves in harm’s way every day will have a reliable ally and champion.

His experience and expertise working alongside law enforcement will bring, in Jefferson’s words, “equal and exact justice to all,” while making sure officers have the resources and support at the federal level to effectively administer justice.

As attorney general, Sessions will control more than $2 billion in federal grant funding to local jurisdictions—funds to support crime-fighting efforts in communities across the country.

Millions of voters across America went to the polls in November and strongly repudiated the failed policies of the past eight years, and voted to take our nation in a better direction. A majority of Americans from across the demographic and political spectrum told Gallup last year that they were more concerned about crime than at any time in the past 15 years.

Trump promised action to address the problem, and as attorney general, Sessions will deliver on that promise. Law enforcement officers and American citizens will be safer, the Constitution will be better protected, and the rule of law will be properly enforced with Sessions as attorney general.

People of faith call on members of the U.S. Senate to quickly and overwhelmingly vote to confirm Sessions and let him get to work getting America’s law enforcement system back on track.