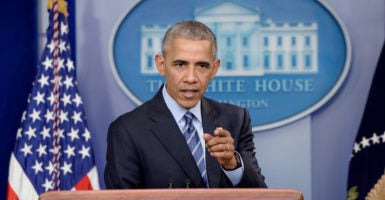 According to President Barack Obama, the last eight years have been just swell. But his rendition of history leaves out a few important facts about the state of America following his two terms as president.

In two videos, we run through 13 facts about his administration’s domestic and foreign policy record he conveniently ignores.

On the domestic front, the national debt has almost doubled on his watch. He is responsible for an unparalleled expansion of the job-killing regulatory state. And his signature policy, the Affordable Care Act, has proven to be anything but affordable for many Americans.

His foreign policy and national security record also paints a bleak picture. By any objective measure, transnational terrorist threats are far greater today than when Obama took office in 2009. His policy of appeasement toward hostile regimes in Iran and Cuba have not made Americans safer or the Cuban people freer. And his refusal to adequately fund the U.S. military has threatened the readiness of our country’s armed forces.