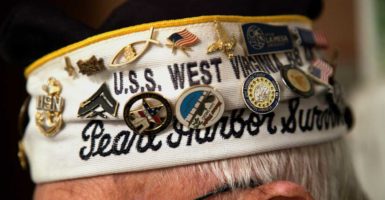 It seemed like a positive end to another rough year for the VA and the people the government-run health care system is supposed to put first.

But a veterans advocate is advising news consumers to read the fine print. While the vast majority of VA hospitals did note improvement in at least one category, that doesn’t mean the broken single-payer system is anywhere near fixed, said Kevin Nicholson, a veteran of two wars and member of the Wisconsin Board of Veterans Affairs.

“If you saw an individual facility that did improve a call response time, that’s great. I think we should all be rooting for the VA hospitals to improve,” Nicholson told Wisconsin Watchdog last week on the “Vicki McKenna Show,” on NewsTalk 1130 in Milwaukee.

“But I would not go and say that 82 percent of the hospitals measured in this study saw a collective widespread improvement that would indicate a directional change in the VA that we should be extremely happy about,” he said.

But not all quality categories are created equally. The categories include some measures not necessarily critical to veteran care.

SAIL, as the ratings system is known, “accesses 26 quality measures in areas such as death rate, complications, and patient satisfaction, as well as overall efficiency at individual VA Medical Centers,” according to a department news release.

“When they say that 82 percent of facilities saw improvement, what they are saying is amongst these [26] metrics, 82 percent of hospitals measured bounced up in at least one of these metrics,” Nicholson said.

And one area of improvement does not a changed medical center make.

The VA’s improvement metrics include a one-star to five-star rating.

The Phoenix VA hospital, ground zero of a veteran care wait-time scandal, still ranked among the worst VA medical centers in the country.

In 2015, the hospital was the subject of congressional investigations for its prescription policies that led to the death of a Marine veteran. Whistleblowers said they were retaliated against, and some patients who complained were treated terribly, according to multiple sources.

Most recently, the medical center earned more unwanted national attention after reports of a dentist potentially exposing hundreds of veterans to serious diseases.

The real baseline metric, Nicholson said, should be real improvement at the hospitals in Phoenix and Tomah and the John D. Dingell VA Medical Center in Detroit, which, like Phoenix, received a one-star rating.

Phoenix, Nicholson said, is the “canary in the coal mine.”

“If that individual facility has not improved given the nationwide storm that descended upon it with the problems the Phoenix VA has had, that would indicate that collectively there has been no strong directional change in the VA system,” said the Milwaukee-area conservative who is mulling a 2018 run for the U.S. Senate seat held by Madison Democrat Tammy Baldwin.

“This is why I get upset with people like [President] Barack Obama, [U.S. Rep.] Nancy Pelosi, and Tammy Baldwin. They just can’t turn their eyes toward these problems and just admit that, yes, there is a problem with huge government-run health care facilities,” Nicholson added.

The businessman and veteran of the wars in Afghanistan and Iraq asserts that Tomah is symptomatic of a Titanic federal health system that does not have the will or the means to right the ever faltering ship. And while commendable, Tomah’s new leadership cannot solve the systemic problems of government-run health care, Nicholson said.

“If you look at the bureaucratic issues that create this kind of problem in the first place, boy it would be a lot better if something like Tomah were pushed down to the state level or to the private sector where people would be held accountable much, much earlier in the process, when these problems start to pop up and we’d actually see much greater response,” Nicholson said.

VA officials earlier said they did not release the internal rating because doing so “would likely confuse our veterans and the general public.”

They charged that USA Today was irresponsible for publishing earlier ratings, before lawmakers applied heat on the VA to publicly release them.

“It is a disservice to veterans to lead them to believe that a one-star facility means they won’t get care they need,” said David Shulkin, the VA’s undersecretary for health.

U.S. Reps. Debbie Dingell, D-Mich., and Tim Walberg, R-Mich., said it would be irresponsible for the VA not to release the information.

“Veterans, just like every other patient, deserve to know how their hospitals are performing and what services need to be improved,” Dingell and Walberg wrote last week in a letter to VA Secretary Bob McDonald, as quoted by Stars and Stripes. “Having a secret rating system only serves to increase distrust of the VA and may give the appearance that the department has something to hide.”