When Energy Efficiency Rules Hurt the Public and the Environment 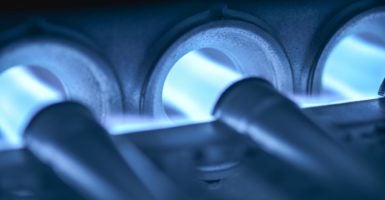 Technological advances are making natural gas furnaces more efficient and cost-effective for consumers, but a pending regulation from the Department of Energy could disrupt that progress. (Photo: iStock Photos)

Arthur Corbin is president and CEO of the Municipal Gas Authority of Georgia.

Over the last several years, an extreme and ideologically-driven environmental agenda has hijacked our national energy policy.

Whether its goal is to keep fossil fuels in the ground or to electrify America based on a naïve belief that all electricity will be renewable within 30 years, or some combination, this bias is what we now have come to expect from the Department of Energy and its Energy Efficiency and Renewable Energy program.

The example I know well is its effort to increase the minimum energy efficiency for natural gas furnaces. The Department of Energy has ignored due process and subverted sound science to satisfy an ideological result that is not justified by the facts.

The American Public Gas Association was compelled by the Department of Energy’s bias to fund research to demonstrate the incredibly negative impact the proposed natural gas furnace regulation would have on American homeowners.

Approximately 56 million homes across the country are heated with natural gas furnaces because of their energy efficiency and cost benefits. As proposed, the department’s rule would incentivize homeowners to switch to less efficient home heating options, such as electric resistance, which would more than double their home heating cost and yield greater carbon dioxide emissions.

The American Public Gas Association’s technical analysis exposed even greater flaws within the Department of Energy’s rulemaking process and the economic model it depends upon to justify the purported benefits of new regulation.

Procedurally, the association has been forced to take the Department of Energy to court and file multiple complaints with its inspector general because of the arrogance of its bureaucrats.

When the department attempted to set a new efficiency standard via a direct final rule in 2011, it clearly failed to touch all the bases and make appropriate findings of consumer impacts. So the American Public Gas Association appealed and the rule was withdrawn three years later.

We believe the Department of Justice urged the Department of Energy to withdraw the rule because government attorneys did not want this particular matter to be the case of first impression on the final rule process when the government so clearly failed to address public comments opposing the rule.

In 2014, the Department of Energy published a proposed furnace rule (supplemented this year) that went far beyond the initial proposal. During these proceedings, the department twice issued extensions of deadlines after the deadline had passed.

In both cases, the American Public Gas Association had filed timely comments supported by extensive technical analysis in opposition to the rule when major proponents of the rule were yet to file. The association has filed a formal complaint with the Department of Energy’s inspector general and requested an investigation of this perversion of fair play.

On the substance, the American Public Gas Association’s work with the Gas Technology Institute has revealed how the Department of Energy and the Lawrence Berkeley National Lab have used nonpublic data, flawed consumer economic modeling, and unfounded economic justifications.

Over the years, its life cycle cost analysis has become absurdly complex and thus ripe for manipulation. We have seen the use of unjustifiable assumptions to obtain particular results to hide the true consumer costs of the proposed regulation.

Most importantly, the Department of Energy is ignoring the fact that natural gas is the most energy efficient and environmentally sound manner for the vast majority of Americans to heat their homes.

Technological advances are making natural gas residential furnaces more efficient, and the public is snapping them up when they save money. This is proof that the market is working.

Between 2006 and 2011, high efficiency condensing furnaces saw a slight artificial bump in sales due to government tax credits. But even with those tax credits, the market trends were not altered much. The use of such furnaces has been steadily rising since 1980, and it continues to rise after the artificial bump.

The upshot is clear. Consumers who benefit from a more expensive technology will purchase that technology—and in this case, it is a higher efficiency condensing natural gas furnace. People should drive markets, not the federal government.

The American Public Gas Association has been one of the leading opponents of the Department of Energy’s proposed furnace rule. This group represents municipally- and community-owned natural gas systems across the country.

These systems are owned and accountable to the citizens within their communities. Who is better equipped to make decisions that impact the lives of Americans, unelected Washington bureaucrats or the homeowners themselves?

The Department of Energy admitted its current proposal would negatively impact 20 percent of American homes. In addition, the overwhelming majority of people who would be hurt are low-income families.

Set aside the fact that the department freely acknowledges and accepts that its proposal would harm 1 in 5 families—its open willingness to do so is incredibly disturbing.

The American Public Gas Association is not opposed to energy efficiency. However, the Department of Energy’s proposed furnace rule will ultimately undermine efficiency goals while significantly increasing costs for American consumers.