Gunman Kills at Least 58 in Las Vegas, Thought to Be ‘Lone Wolf’ 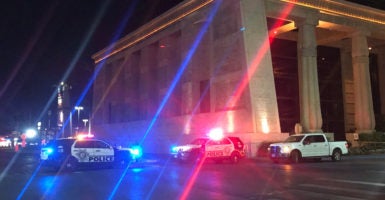 In what authorities are calling the worst mass shooting in modern U.S. history, a gunman killed at least 58 people and wounded more than 500 Sunday night at an outdoor country music concert in Las Vegas by firing from the 32nd floor of a hotel.

The number of deaths—updated from 50 to 58 about 11:30 a.m. EST—surpasses the carnage from the Orlando nightclub shooting in June 2016, where 49 people were killed. Police also updated the number of wounded from 400.

The gunman began firing shortly after 10 p.m. local time, or 1 a.m. Eastern, as singer Jason Aldean was wrapping up the three-day Route 91 Harvest music festival on the Las Vegas Strip.

Police identified the gunman as Stephen Paddock, 64, who they said killed himself after a SWAT team used explosives to get into his hotel room at the Mandalay Bay Resort and Casino across the street from the concert attended by thousands. His death put the initial toll at 59.

The Associated Press reported shortly after 9 a.m. Eastern that police said the shooter killed himself before officers entered the room.

The office of Clark County Sheriff Joseph Lombardo earlier estimated 50 were killed and said 406 were taken to hospitals, AP reported.

Police said they believe the mass murder was a lone-wolf attack not connected to Islamist-inspired terrorism.

Police identified a woman who lived with Paddock as Marilou Danley, 62, but later said they had located her outside the country and don’t believe she had anything to do with the shooting.

However, Lombardo later said investigators still consider Danley a “person of interest” in the shooting.

In an Instagram post, Aldean said the shooting was “beyond horrific,” adding: “It hurts my heart that this would happen to anyone who was just coming out to enjoy what should have been a fun night.”

President Donald Trump said in a Monday morning tweet: “My warmest condolences and sympathies to the victims and families of the terrible Las Vegas shooting. God bless you!”

Sanders added: “We are monitoring the situation closely and offer our full support to state and local officials. All of those affected are in our thoughts and prayers.”

Ken McIntyre contributed to this report, which has been updated as developments occurred. It puts the initial number of those killed by the gunman, not including himself, at 58.