5 Ways the Feds Might Trip Up Santa Claus This Year 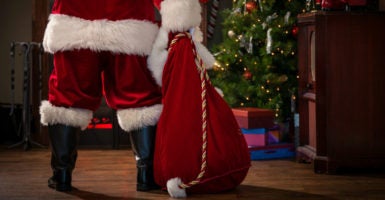 Overcriminalization describes the government's use of criminal penalties to penalize minor infractions that could be more suitably remedied through civil, administrative, or private action. (Photo: iStock Photos)

While most people know Jolly Old Saint Nick as a friendly figure, he too is not immune from the perils of administrative overreach and overcriminalization.

To get you in the Christmas spirit, here is a list of some of the potential crimes and federal law violations of Saint Nick as he prepares to take flight for 2016.

Many have tried finding Santa’s workshop—without success—but children have long mailed letters to the Santa Claus House located at 101 St. Nicholas Drive in North Pole, Alaska. This office location is the first source of trouble for Father Christmas. Under the Reindeer Act, signed into law by President Franklin D. Roosevelt in 1937, only Alaska Natives are allowed to own reindeer in Alaska.

While Santa has been operating out of the North Pole for many years, only Eskimos, Indians, and Aleuts inhabiting Alaska at the time the United States purchased the land from Russia are considered natives under the act, and Saint Nicholas is from the Greek village Patara in modern-day Turkey.

Luckily for Santa, he might be able to avoid the $5,000 fine for violating this provision of the Code of Federal Regulations, but only if he applies for and is granted a special use permit to possess reindeers as a non-native.

Even if Santa gets around the Reindeer Act, he may face civil and criminal penalties under the Lacey Act if his purchase, sale, possession, or use of reindeer—or any other flora or fauna—violates any state or federal law or the law of any foreign nation, no matter what language or code that foreign law is written in.

Just as some unwitting Americans have been convicted of offenses such as the
“importation of Caribbean spiny lobsters from Honduras” in violation of Honduran packaging laws, Santa could be committing a crime each time he crosses borders to deliver flora or fauna.

3. Flying Without a License

Despite Santa’s many years of experience, there is no Mr. Claus listed in the Federal Aviation Administration’s pilot certificates database. If Santa is piloting his sleigh without an airman’s certificate, he is in violation of 49 U.S.C. § 46317.

Any pilot who operates an aircraft without a proper license is guilty of a federal crime punishable by three years in prison (the sleigh would almost certainly be deemed an aircraft under 49 U.S.C. § 40102(a)(6)). And that is only for Santa’s role as a pilot. If his sleigh is not deemed airworthy, Santa will be in violation of 14 C.F.R. § 91.7 and subject to additional civil penalties by the FAA.

If Santa’s sleigh is approved, he then must post “within” the “aircraft” a copy of the registration, airworthiness certificate, and other official documents, to be displayed “at the cabin or cockpit entrance so that it is legible to passengers or crew,” per 14 C.F.R. § 91.203(b); the sleigh’s baggage compartment must be installed subject to Subsection C with a copy of FAA Form 337 authorizing such installation maintained on board the sleigh; and all fuel venting and exhaust emissions must meet additional requirements.

Any white lie that falls within the jurisdiction of the U.S. government could be a federal crime. As Heritage Foundation scholars have written elsewhere, there is one general federal statute for false statements that “should be broad enough to reach any fib or whopper that the federal government could have a good reason to prosecute.”

But there are dozens more specific criminal statutes that punish false statements regarding such minutiae as fluid milk products.

Supreme Court Justice Ruth Bader Ginsburg once observed that, under federal false statement statutes, “the prospect remains that an overzealous prosecutor or investigator—aware that a person has committed some suspicious acts, but unable to make a criminal case—will create a crime by surprising the suspect, asking about those acts, and receiving a false denial.”

Here, once Santa gets off the ground, his real legal trouble is only just beginning. A government agent need only ask Santa if he committed burglary, trespass, or larceny, or ask him, “Are you really Santa Claus?” In that case, Santa really would need a Miracle on 34th Street to stay out of the slammer for lying.

Even if Santa evades capture during his Christmas Eve flight, he then must deal with Uncle Sam upon his return to the North Pole. Under IRS gift tax rules, the giver of gifts above a certain threshold is taxed at a rate up to 40 percent of the value of the gift.

While individuals are allowed to make gifts up to $14,000 per recipient without encountering any tax consequences—most toy trucks and dolls would probably fit under this exemption—gifts above the limit must be reported on IRS Form 709.

As such, each time Santa drops off a shiny new BMW for mom or dad, he will be on the hook for an even bigger tax bill on April 15. Willful failure to file a gift tax return can land Santa in prison for up to one year under 26 U.S.C. § 7203. Let no good deed go unpunished.

While those are just a few examples of how Santa may be held criminally and civilly liable for violating U.S. law, there are several other ways in which he operates in legal gray areas.

For instance, how does Santa compensate all of his elves who are working around the clock to finish making toys before the big day? If they are not receiving proper overtime pay in a safe work environment, Santa will be in violation of numerous provisions of the Fair Labor Standards Act. Finally, given the size of his operation, Santa must be complying with the Affordable Care Act’s employer mandate.

The American people—and Mr. Claus—deserve better. Heritage scholars have identified a comprehensive strategy to combat the problem of overcriminalization, which threatens liberty by using the criminal law and penalties to attempt to solve every problem in society and compel compliance with regulatory schemes.

Merry Christmas to all, and to all a good night.