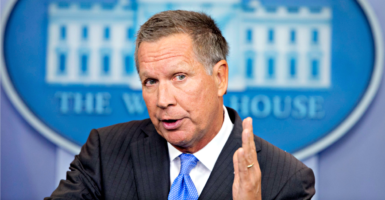 Ohio Gov. John Kasich, here speaking Sept. 16 to reporters at the White House, has 10 days to sign or veto a bill prohibiting the abortion of a baby with a detectable heartbeat—which generally occurs at about six weeks. (Photo: Michael Reynolds/EPA/Newscom)

The Ohio Legislature has passed and sent to Gov. John Kasich’s desk a measure that would ban abortion after a baby’s heartbeat is detected, about six weeks following conception.

Lawmakers passed the Unborn Heartbeat Protection Act on Tuesday as an amendment to a child abuse and neglect bill.

If signed by Kasich, the legislation would “generally prohibit an abortion of an unborn human individual with a detectable heartbeat,” according to the language of the bill.

“Republicans are united that abortion is unacceptable in America,” U.S. Rep. Warren Davidson, R-Ohio, said in a statement Wednesday. “Our party platform advocates for a complete ban on abortion and states that ‘the unborn child has a fundamental right to life which cannot be infringed.’”

“Our party platform advocates for a complete ban on abortion,” @WarrenDavidson says.

“Fetal heartbeat,” the bill asserts, “ … has become a key medical predictor that an unborn human individual will reach live birth.”

Kasich, a Republican who generally is pro-life, has 10 days to sign or veto the legislation.

Kasich’s press secretary, Emmalee Kalmbach, would not characterize the governor’s inclination amid a flurry of activity in the Legislature’s lame-duck session.

“A hallmark of lame duck is a flood of bills, including, bills inside of bills and we will closely examine everything we receive,” Kalmbach told The Daily Signal in an email.

In 2014, however, Kasich said he had legal concerns about a “heartbeat bill,” The (Cleveland) Plain Dealer reported.

“At the moment of conception, a new and distinct human being comes into existence—someone who has inherent value and possesses a right to life,” Melanie Israel, a research associate at The Heritage Foundation, told The Daily Signal. “By witnessing to this fundamental truth, the pro-life movement has seen significant victories in state legislatures in recent years.”

“The passage of this legislation in the Ohio Senate demonstrates our commitment to protecting the children of Ohio at every stage of life,” state Sen. Kris Jordan, R-Ostrander, said in remarks quoted by CNN.

Similar laws have been struck down by courts in Arkansas and North Dakota.

“A new president [and] new Supreme Court appointees change the dynamic, and there was consensus in our caucus to move forward,” Ohio Senate President Keith Faber, R-Celina, said, according to The Columbus Dispatch.

The protections provided in the Unborn Heartbeat Protection Amendment are a step in the right direction in protecting the most vulnerable among us, the unborn. I look forward to this becoming law and saving countless lives in Ohio.

Both pro-choice and pro-life groups, however, question the legality of such legislation.

“Banning women from getting a medical procedure is out of touch with Ohio values and is completely unacceptable,” Kellie Copeland, executive director of NARAL Pro-Choice Ohio, said in a prepared statement. “Clearly this bill’s supporters are hoping that President-elect Trump will have the chance to pack the U.S. Supreme Court with justices that are poised to overturn Roe vs. Wade.”

In 1973, the Supreme Court case known as Roe v. Wade made abortion legal across the nation.

“Everyone is swept up in Trumpmania, but let’s be realistic,” Ohio Right to Life President Mike Gonidakis said of the prospects of the legislation in court, according to USA Today.

His pro-life group supports a ban on abortions after 20 weeks, when scientific evidence suggests unborn babies feel pain, but was neutral on the heartbeat bill.

“Both are previability [abortion] bans, but we believe [the 20-week ban] is the best strategy for overturning Roe v. Wade and will ultimately prove most palatable to the Supreme Court,” Katherine Franklin, a spokeswoman for Ohio Right to Life, told The Hill.

Heritage’s Israel, however, said the Ohio measure has value:

Advancing policies that protect the most vulnerable and defenseless among us will help hasten the day when every human being, from the moment of conception, is protected in law and welcomed in life.